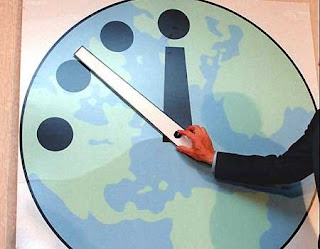 As mentioned on Saturday and Sunday, a great many commentators are raising fears that we may be entering a 2nd Great Depression.

Pundits recall a time when the stock market crashed and Wall Street panicked.

This set off a chain reaction of bank failures and temporarily closed the New York stock market for 10 days. Factories began to lay off workers as the United States slipped into desperate economic times.

Am I referring to the Stock Market Crash and Depression of 1929?

These events are a summary of the Panic of 1873, which lead to the Great Depression of 1873.

Today the 'Great Depression of 1873' has been re-named 'The Long Depression' and is all but ignored in modern economic study. It was a period of deep economic recession that affected much of the world and was contemporary with the Second Industrial Revolution.

This depression started in the United States following the Panic of 1873. The National Bureau of Economic Research (NBER) dates the contraction following the panic as lasting from October 1873 to March 1879. At 65 months, it is the longest recession identified by the NBER. The Depression itself, however, ranged from 1873 until as late as 1897, some 26 years.

The 1873 Depression was a worldwide international phenomenon that started with the banks, just like the current 2008/2009 panic. In fact the collapse that has followed the Great Panic of 2008 looks a lot more like the 1873 crisis than 1929 one.

Historians familiar with the Panic of 1873 say that economic 'experts' are mistaken to compare the current crisis to 1929 because the federal government was far more passive in the 1920s. The U.S. let 15,000 out of 30,000 banks fail then. Government efforts to jump-start the economy were slow and relatively weak until President Franklin Roosevelt came along with the New Deal.

Today we reap the benefits of policies created during that era. Roosevelt helped create New Deal legislation to insure bank deposits and enacted other modern relief efforts like unemployment compensation to help those in distress. When a bank failed back then, regular people were completely wiped out... and half of all the banks in the United States failed in the years following 1929.

Historian's who have studied the panic of 1873 say the swirling events happening today more closely parallel what is properly termed 'The First Great Depression of 1873'.

And those same historians are very concerned at what they see happening saying today's economy might even be worse than the American economy in 1873.

Scott Reynolds Nelson, a professor of history at the College of William and Mary in Williamsburg, Virginia, says, "This is a perfect storm: banks failing, stock markets declining and commodity prices dropping," all conditions eerily reminiscent of 1873.

Nelson says it took America four years to recover from the 1873 panic. Tens of thousands of workers -- many Civil War veterans -- became homeless. Thousands lined up for food and shelter in major cities. The Gilded Age, where wealth was concentrated in the hands of a few "robber barons like John D. Rockefeller," followed the panic.

It is said that those who ignore history are bound to repeat it.

And when Paul Volcker, chairman of the newly formed Economic Recovery Advisory Board advising President Barack Obama, says "I don't remember any time, maybe even in the Great Depression, when things went down quite so fast, quite so uniformly around the world… you know, even the experts don't quite know what is going on", it rightly raises alarm.

Could it be that our so-called ‘experts’ are studying the wrong depression as they struggle to apply 1929 solutions to 2009?

If so it could prove to be a fatal oversight, ensuring that we slip inexorably into what will become known as The Third Great Depression.

Send your comments via email to village_whisperer@live.ca
Posted by Whisperer at 2:01 AM

Email ThisBlogThis!Share to TwitterShare to FacebookShare to Pinterest
Labels: Depression, Recession, US economic stimulus, US Economy