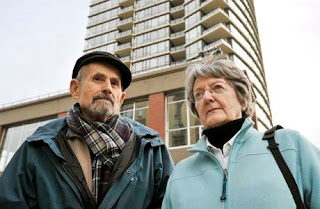 On February 5th, we profiled how Onni is suing 20 pre-sale buyers who are trying to walk away from their commitments in the Aria 2 development. This follows similar legal action by Amacon Developments.

Lou and Donna Skoda were 'pre-sale' buyers in Onni’s Aria 2 development in Port Moody and are among the 'pre-sale' defaulter's who are bing sued to hold them to their September 2007 committment.

Skoda says they always wanted to complete the purchase, but the downturn in Vancouver’s real estate market got in the way of their plans. They approached Onni to renegotiate their deal, but the developer wouldn't budge.

Skoda says they got caught in a squeeze between selling their current property and promising to buy into Onni. When they failed to sell their existing apartment, they were unable to pay the $456,000 they had committed to with Onni.

Without being able to sell thier current apartment, the Skoda's are unable to secure a mortgage to buy they Aria 2 apartment.

The Skoda's are 79, retired and live on fixed income.

The couple stands to lose the $68,350 deposit they put down on the property, plus additional damages that Onni is seeking in its suit against them, starting with lost property value.

Onni has put the apartment the Skoda's committed to up for resale at a price 25 per cent less than their contract price as part of the “liquidation” of 375 unsold units Onni announced two weeks ago.

We will check back on this as it progresses to see how it works out.

Send your comments via email to village_whisperer@live.ca
Posted by Whisperer at 1:04 PM