Last summer a colleague at work (his name is Mark) and I were talking about the future direction of real estate and the stock market. We both hold similar beliefs about the bubble conditions of both markets.

At that time Mark pointed me to an excellent website called Greater Fool: the troubled future of real estate (http://www.greaterfool.ca) put together by self-promoter Garth Turner.

On his website Turner bills himself as a current Member of Parliament for Halton constituency in Canada’s House of Commons (he lost that post in the fall 2008 federal election), a member of Canada’s Privy Council and as having expertise in business, personal finance, real estate and taxation.

Notwithstanding his inability to update his website’s profile page, Turner is a prolific blogger whose insightful daily posts have become mandatory reading. He is a straight-forward, shoot-from-the-hip commentator who provides a brilliant, succinct analysis of the current Canadian economic landscape.

He has authored several books including ‘Greater Fool’ which has gained him accolades for predicting the current crash in Real Estate. His recently released ‘After the Crash' provides advice on how to deal with the fallout from the 2008 stock market crash and how to safeguard your investments.

Now… being a fan of www.greaterfool.ca, I was keen to see Turner’s recent appearance on CBC-TV’s award-winning show ‘The Hour’ with George Strombopolous to promote this new book.

Curiously Turner prefaced his appearance on ‘The Hour’ with a blog entry in which he referred to Strombopolous as ‘a pussy biker who rides a sports machine and likely wears a pretty leather jumpsuit’.

Turner is either (a) a brilliant marketer, (b) playing on an inside joke with Strombopolous, or (c) doesn’t have a clue about marketing and just alienated his entire twenty-something audience.

In the show it was mentioned that Turner would be touring British Columbia and coming to the Village on the Edge of the Rainforest for an free appearance at the Century Plaza 500 Hotel.

I decided I had to attend.

Now Mark couldn’t make it because of shift work. I told him “no worries”, I planned on going and I promised to pick up a personalized autographed copy of ‘After the Crash’ for him.

“Do you think he will have some there?”, Mark enquired naively.

“Phhhfffttt!”, I scoffed. “It’s a book tour buddy. Of course he will have them, are you kidding?”

I laughing told Mark I would pay him $5.00 if there wasn’t “a giant table when you walk in with stacks of books available to sell and Turner happily autographing each and every one. It may be billed as ‘A Conversation with Garth Turner’, but it’s really a book tour. Remember… this is an out of work politician and this is a free event. Don’t kid yourself.”

In person Garth was readily available and approachable to all before the speech. His talk was well presented and entertaining, although it lacked the fire and brimstone of doom and gloom one might have expected, save for a deftly inserted prediction of a further 30% decline in Vancouver housing values from the current 16% drop.

Turner happily took questions afterward, and it came across as a genuine ‘conversation’ on real estate and the financial situation. Everyone who attended seemed to think it worth their while.

But there was just one small problem.

Now I left during the Q&A that followed the presentation so I cannot speak to what may have come afterwards. Perhaps a book sales table was wheeled out at the very end. But the fact of the matter is the only copies of ‘After the Crash’ I saw were five autographed tomes that Turner held up during his speech to donate as door prizes. 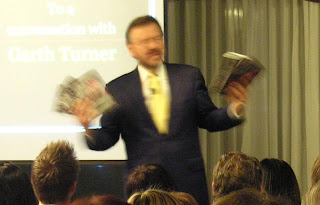 There was no sales table piled high with books. No shepherding of eager fans to a carefully marketed autograph session.

Just Turner having a 'conversation', WTF????

So I apologize Mark, I couldn’t get you a copy.

Garth… you pussy… you cost me five bucks!

If you get a chance to see Garth Turner in person, I would recommend making the effort. If you are interested in his book, you can order through this link on his website:
Buy 'After the Crash'

Just don't assume you can get one at his public appearances. How does that saying go? When you 'assume' you make an as... 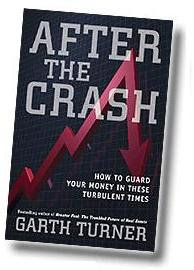 Send your comments via email to village_whisperer@live.ca
Posted by Whisperer at 12:37 AM