Mainstream US media begins asking "Should US Banks be Nationalized?" 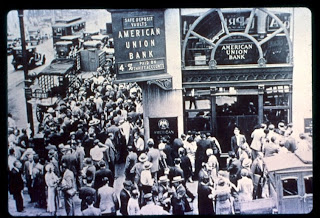 Back on January 24th, 2009 I posted an entry titled "Concept of US Bank Nationalization Gathering Support" .

The idea continues to gather steam and is now being openly discussed in Congress... even among some Republicans.

Senator Lindsey Graham was quoted in the Financial Times that many of his colleagues, including Senator John McCain, agree that nationalization of some banks should be “on the table”. He says many people think it just doesn’t make sense to keep throwing good money after bad when it comes to institutions like Citibank and Bank of America. Graham says people shouldn’t get caught up on the word “nationalization” that we can’t keep funding what he calls “zombie” banks without the public taking control.

The current US administration is opposed to nationalization in principle and Treasury Secretary Geithner has said “governments are terrible managers of bad assets".

But will the US government have a choice?

Look at how much money the government has already dumped into American banks. According to the Treasury Department — about 400 banks in 47 states have gotten government aid since the program started in October.

Banks begin to report first quarter earnings in a few weeks... watch this topic to generate a significant frenzy, both in the media and in the markets. Stockholders with equity in any of any nationalized bank are left with nothing. Knowing that, would you hold on to your Bank of America or Citicorp stock.

It should make this week's edition of 'Bank Failure Friday' all the more intriguing and compelling.

Send your comments via email to village_whisperer@live.ca
Posted by Whisperer at 3:17 PM

Email ThisBlogThis!Share to TwitterShare to FacebookShare to Pinterest
Labels: Nationalization, US Banks