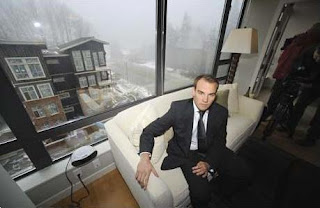 It you signed a pre-sale agreement at the height of the market last year to buy from Onni Developments, had second thoughts as the market has collapsed, and are prepared to forfeit your deposit and just walk away... then Onni executive vice-president Chris Evans has a message for you.

Were gonna sue your ass off.

Two postings ago we saw how Bowra Group announced they are dumping their H+H Yaletown development after 15 pre-sale “buyers” refused to complete on their deals. In the youtube link in that posting, Bowra stressed they planned to sue those pre-sale buyers for any loss incurred (above and beyond the forfeited deposits) if buyers failed to complete on their commitments

For Onni Developments, there will be no publically issued veiled threats, they are starting to sue.

Onni has joined the litigational fray with a flurry of lawsuits against against 20 pre-sale buyers in the Aria 2 building of its Suter Brook community in Port Moody.

As you may recall, Onni is the developer who in January attracted attention for launching a “liquidation sale” of 375 condominiums in developments across the Lower Mainland, including the Suter Brook community, at prices it claimed were as much as 40-per-cent off original prices.

The statements of claim, filed on Jan. 21, accuse the buyers of breaching their contracts for not closing on their specified purchase dates, and seek to claim the deposits buyers paid as well as additional potential damages.

In the claim, Onni said it “has suffered and will continue to suffer additional loss, damages and expense,” including reduced property value at resale, commissions to realtors, marketing costs and legal fees.

None of the claims have been proven in court.

All of this is further evidence that developers are being squeezed by their financiers for payment of the construction loans secured to build projects.

Onni joins Amacon, who in January filed suit against seven buyers in its Morgan Heights project.

Look for more such lawsuits in the coming months as a whole raft of buildings built during the peak of construction costs are nowing being completed. These buildings were commenced based on pre-sale contracts signed at the height of market last year.

The value of those units has depreciated considerably just as these commitments are now coming due.

Send your comments via email to village_whisperer@live.ca
Posted by Whisperer at 4:33 PM