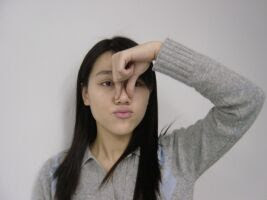 Have you ever done a double-take at news you found somewhat incredulous?

As you have seen in the last post, H+H Yaletown had their big liquidation sale this past weekend - Saturday and Sunday from 1:00pm to 5:00pm.

A local real estate enthusiast attended on Saturday afternoon and, for all appearances, the showing was a flop despite extensive preparations by developers for a large crowd. He posted a youtube clip which we linked in yesterday's post and it showed empty tents, porta-potties, security guards... but not many buyers in sight.

Curiously, on the evening news, we learn our intrepid enthusiast may have missed the big 'rush'. In this news clip from Global TV news, images of those same tents filled with people camping out that night before fill the screen. Eager young buyers gush for cameras at the 'great opportunity to increase equity and upgrade'.

Supposed sales data would seem to reinforce the mad rush to purchase. 40 of 44 units sold:

When you watch the TV news video, those same tents that were empty for most of Saturday afternoon, are filled the night before with campers eager to stay the night.

One has to assume that all 40 buyers were there at the crack of opening at noon and then bought the place out.

Curiously... no one else seem to come after that, at least not in comparable numbers.

Even stranger are online comments of an attendee who stated, "Didn't seem like there's many people there when i drove by at noon just now. I'll be interested to know how many and how much these units got sold for."

Whaaaa? Big overnight lineups with filled tents the night before and then just before the official start of sale... the place is an apparent ghost-town?

Presumably the only buyers to show are those comfortably accomodated in the tents.

Listening to the newscast, one can't help but be impressed with how articulate the eager buyers are and how well they speak of what a great 'investment opportunitiy' this is and 'what a chance to upgrade' it is.

Contrast that with some online comments of some who viewed but did not buy:

"Went there today inside the building through other realtors. Agree with the hallways - ridiculously narrow. Narrowest I've ever seen in my life !! I'm a skinny short guy, and I could only stretch 1 arm!! Unacceptable. How does one move furniture without scraping the walls?? I assume strata's gonna go up after everybody moved in, b/c the walls are like grafitti written by furniture!! Checked a couple suites, quality seems ok I guess. I saw a few small cracks, makes me wonder about fit & finish. Floor plans are cramped. They crammed too much into each suite - flex, insuite storage, unnecessary 2 sinks, bathtub & stall in each washroom. What's left for living room & bedrooms? Not much. My 2 cents. No I didn't buy. Missed the viewing times. Lineup was for purchase only - they wouldn't show us. Quite a few buyers inside though (looked ~dozen). Good location still."

"Went there this Saturday just after 4 pm, and noticed there were some people but not many. I did not enter into any of the suites but did enter the building. The first thing I noticed was how narrow the hallways were. In fact it was so narrow I almost felt claustrophobic. I also noticed on the bulletin board there was a notice indicating something about the elevators not being repaired because the repairmen were not being paid. Overall I was not impressed. I think they are going to have serious issue with quality and maintenance in this building. The people that recently bought are just another round of bagholders."

"I think this liquidation sale was a flop. The lesson that the receiver should learn is that if you advertise 40% off, you should have a good selection of units with real discounts. At least the ONNI sale guaranteed a minimum discount of 25%. The Bowra sale claimed up to 40% off. Quite a nebulous statement. Obviously they advertised a sale but there was no sale. People were able to preview and determined the discounts offered were insignificant. Hence, no one showed up on deal day."

Now maybe I'm just a cynical curmudgeon but there's 'something rotten in Denmark' with this story.

Certainly one has to be impressed with the foresight of the developer to provide just enough overnight accomodations for those who snapped up all the units. This precient ability to predict exactly how many will show up (and no more) is nothing short of amazing. Makes you wonder how they got caught in the market downtown and had to liquidate their stock to begin with.

But when I watch the newsclip I can't help but be reminded of those cheesy late-night 'info-mertials' with transparent, scripted testimonials from 'actual-buyers'. It comes across like a carefully crafted stage production - but the audience never materialized from the advertized hype to see the show.

One notes that purchasers have a 7 day period to commiserate on their purchase. We will watch with keen interest to see if these units re-appear on the market should all those 'early-birds' fail to get financing or change their minds for other reasons.

Send your comments via email to village_whisperer@live.ca
Posted by Whisperer at 2:15 AM