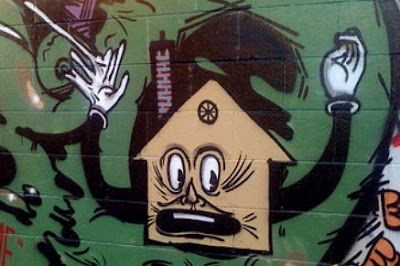 “The stability we've started to see in U.S. housing was likely a false calm before a bigger storm. There are millions of homeowners under threat of losing their homes in the next two years.”

This is the observation of Derek Holt, vice-president of economics for Scotia Capital.

It seems a record one in seven U.S. mortgages, or four million homeowners, were in foreclosure or at least one payment late in the third quarter.

Even more astonishing is that Americans with solid credit ratings comprised 33% of the quarter's foreclosures.

This is what happens when a huge surge of people default on their mortgages, and the wave of foreclosures causes a big drop in the value of real estate. It puts other homeowners in an 'underwater' position. Throw in the highest jobless rate in 26 years and suddenly its impossible for many homeowners to make their payments in the quarter.

Another Canadian watching the developments closely is Jennifer Lee, an economist at Bank of Montreal. Increased foreclosures among those with good credit is a problem in any recession, said Lee, but this time the increase comes after the subprime crisis forced millions from their homes and pushed prices down as much as 50% in some cities.

Not only are they losing their jobs and falling behind on loan payments, sharply lower prices mean they aren't able to simply sell their homes to pay off their banks.

“We can't say what is typical any more in the housing sector because we've never experienced anything like this,” she said. “People need to start working again, because when they do find work the first thing they do is get back on track with their mortgages. But, that isn't likely to happen soon.”

Most of these have five-year reset rates, and were issued at the height of the market's bubble. They start coming due in January.

Once again Scotiabank's Derek Holt makes a succinct observation. “You didn't have to prove a thing to get [a mortgage],” Mr. Holt said. “They haven't been a problem because they have such long fuses. But those fuses are just about done, and we're heading into entirely uncharted territory.”

It takes a long time for the housing story to play out. For the United States it started in 2006. The full effects won't really start to be seen until next year.

For Canada the writing is on the wall.

It will start with rising interest rates. The first to get caught up will be all those resetting 0/40 mortgages and the huge number of people who "bit off more than they could chew" in the Great Reflation Drive of 2009.

The problem is, too many dismiss the writing on the wall as nothing more than graffiti.

Please read disclaimer at bottom of blog.
Posted by Whisperer at 8:48 AM