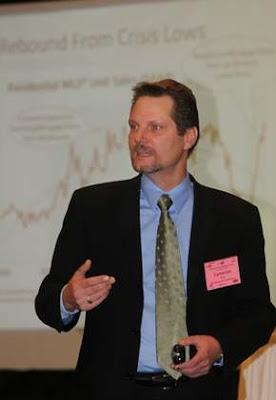 Cameron Muir is the chief economist for the British Columbia Real Estate Association and is someone we have criticised on numerous occasions for his overly optimistic assessments of real estate in BC.

Throughout 2008, Muir seemed to be taking a page from Prime Minister Harper's playbook and endlessly denied the economy was heading for recession and that housing values might decline.

And when they did, Muir still seemed to understate events.

So we were taken aback to read the comments he made yesterday to the Kamloops Homebuilders’ Conference as reported in the Kamloops Daily News.

Muir told the conference that Vancouver’s record housing sales and prices are "not sustainable because interest rates have nowhere to go but up."

Muir noted that last year’s credit crisis helped affordability across B.C. through a combination of lower housing prices and lower mortgage rates. But the same sudden increase in affordability on the Left Coast caused a frantic amount of activity once fear from the crisis wore off. But that activity cannot last, Muir argued, calling it “irrational exuberance.”

(We call it an even more dangerous bubble than we had before the crisis, but we're good with his assessment)

And what does the coming year hold in store for us?

“We have high prices, affordability limits and [then we will] inject higher interest rates.”

And the outlook for the Canadian economy?

“This will be the slowest recovery we’ve ever seen coming out of a recession,” Muir said.

So what will all this mean for real estate?

Those rebounded prices and higher mortgage rates will combine with a slow recovering economy and it will mean the days of double-digit housing price increases are over, Muir argued.

“How high can prices go before consumers reach a limit on what they can pay?” asked Muir.

Hmmm... wasn't the 'doomsday' rate cited by those mortgage brokers in our post on Wednesday set at 8%?

It makes you wonder if Muir didn't get the 'Sunshine, Lollipop and Rainbows' memo sent out by CMHC on the bright future for real estate in 2010. Michael Levy got it.

For Muir, this is the equivalent of having been visited by three spirits and the ghost of Jacob 'Van-Housing-Blogger' the night before the conference.

All that remains now is to see if Muir maintains his penchant for dramatically understating what is coming.

Please read disclaimer at bottom of blog.
Posted by Whisperer at 12:52 AM