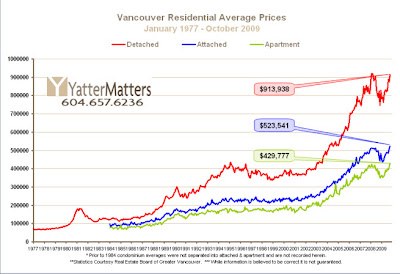 Vancouver's sales numbers for October are out and the average price has pushed higher yet again. Graph above comes from Larry Yatkowsky's website. Click on image above to enlarge.

We have almost reached the previous highs and it's interesting to see how the latest numbers are casting despair amongst those who have been expecting a correction in the Lower Mainland Real Estate market.

Some have speculated that the Vancouver market and it's numbers may be the first to prove the 'bubble pattern' incorrect. That 'pattern' would be the playing out of the bubble lifecycle graph which represents the way all bubbles have corrected themselves in the past (click on image to enlarge). 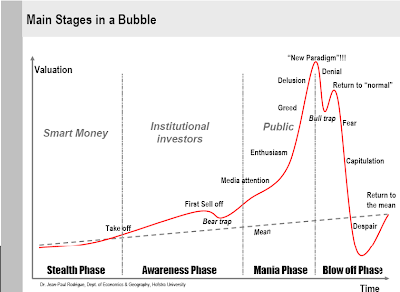 The Rainforest Roundtable was discussing this very issue last night. We would humbly suggest the bubble lifecycle theory is correct, it's the assumption that the Vancouver market had reached it's peak that was incorrect.

Don't get the wrong impression though - our market is in a bubble and it will burst.

The current rise is attributable to one thing and one thing only: government intervention.

Anytime central banks intervene and pump billions or trillions of dollars into the financial system, a bubble is created that must eventually deflate.

Rather than allow the market to correct itself and clear away the worst excesses of the boom period, North American governments have colluded to create another bubble.

By attempting to cushion our economy from the worst shocks of last year's financial collapse, the Bank of Canada and CMHC have ensured that the ultimate correction of this mess will be more severe than it should have been.

As US Senator Ron Paul noted yesterday, "as the housing market fails to return to any sense of normalcy, commercial real estate begins to collapse and manufacturers produce goods that cannot be purchased by debt-strapped consumers, the economy will falter... government intervention cannot lead to economic growth."

The rationalizations for why the economy is recovering will intensify, as will the delusions that BC (and Canada) will not be affected. We will hear the same sort of platitudes we heard last year when we were Canada and BC would not suffer from the recession in the US and that we would not fall into deficit spending).

What we have is a false recovery. I agree completely with Ron Paul who said, "I am reminded of the outlook in 1930, when the experts were certain that the worst of the Depression was over and that recovery was just around the corner. The economy and stock market seemed to be recovering, and there was optimism that the recession, like many of those before it, would be over in a year or less. Instead, the interventionist policies of Hoover and Roosevelt caused the Depression to worsen, and the Dow Jones industrial average did not recover to 1929 levels until 1954. I fear that our stimulus and bailout programs have already done too much to prevent the economy from recovering in a natural manner and will result in yet another asset bubble."

We are in the eye of the economic hurricane that stated last year. And this is a great thing for Canada and the Lower Mainland. It represents an unbelievable reprieve.

The bubble lifecycle WILL play itself out. But after the freezing up of the real estate market last November, Canadians have been given an astounding opportunity to recognize what is coming and prepare.

And that is a good thing. What more could you ask for?

Please read disclaimer at bottom of blog.
Posted by Whisperer at 12:00 AM