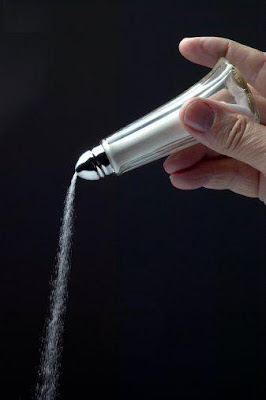 Yesterday shortly after I commented that, in the CHMC world, there is never an outlook that isn't sunshine, lollipops and rainbows - the Financial Post echoed the sentiment: CMHC forecasts are best taken with a large grain of salt.

Speaking of beguiling, did you get a chance to check out this link posted by a faithful reader in the comments section yesterday?

We are treated to 'the good news' about cheap money from a couple of mortgage brokers. Even better, this website has been cited as "first and foremost an up-to-date source of unbiased mortgage advice and industry trends."

The good news offered is in response to media stories about the Bank of Canada's warnings about interest rates. Thus, "13 reasons why low rates and current lending guidelines might not be a disaster in the making."

In one, the Company insists that anyone who receives a 5% down/35 year amortization mortgage "are getting them because they’re well qualified. It’s that simple." (Presumably Mark Carney can cancel his upcoming study).

Then they promptly follow that up with an assertion that some of those 'qualified' borrows aren't actually qualified (huh?). They tell us, "as a side note: The frequency of lender “exceptions” (lenders overlooking guidelines) are nowhere near where they were pre-August 2007."

Didn't they just say anyone who receives the 5/35 mortgage is qualified, "it's that simple"?

The other 13 'points' reference dubious data, but the one that stands out most is the last in which we "suppose a doomsday scenario unfolds and rates rise 4% (to say, 8% on a 5-year fixed). If the average household income is $61,800 today, and the mortgage is $250,000, that would necessitate a $10,400 pre-tax income jump in five years to pay the extra debt service. That’s just over 3% annual wage growth—not an unreasonable earnings growth assumption."

First off, are we to understand that doomsday for these guys is interest rates rising to 8%?

You're joking. Even the Bank of Canada is telling Canadians to expect interest rates to go back to normal... and normal for the last 20 years is 8.25%

And who among those who bought a single family home in the Lower Mainland in the past three years (where where the average detached home is selling for $914,000) has a mortgage of only $250,000?

And since we're on the topic of reality checks, Australia announced yesterday that they are raising interest rates for the second consecutive month with the central bank raising their key rate 17% in the last 60 days.

Higher rates are coming. Bank of Canada Governor Carney knows it, which is why he has been sounding alarm bells the last few months.

And one only has to look at US Government debt to see the scope of the pressures that loom on the horizon.

America must roll over $3.4 trillion in debt over the next four years. This $3.4 trillion does not include any additional borrowing that may be required for other government programs (wars, healthcare, wars, school lunches). Unless the US rediscovers fiscal prudence, annual deficits of $1.4 trillion mean the United States faces the prospect of having to find $9 trillion to fund it's budgets.

There are only so many savings available to borrow, after all. And the competition for capital is going to force rates up to late 1970s levels.

And what will happen if America can't find anyone willing to finance its deficits?

One of the luxuries of issuing debts in the currency you happen to also print currency is that you can print money to pay for them. Technically the Fed can create new money to buy debt issued by the Treasury, funding deficits ad infinitum.

Which is why so many people are fretting about the United States monetizing the debt and why gold hit $1,084 an ounce yesterday (at the time this was written, gold had hit $1,092 on the kitco 24 hour chart).

You have to laugh at the idea that 8% interest rates are a doomsday scenario.

In 1975, an 8% five year mortgage rate would have been considered ridiculously cheap and it's not hard to see how that will be the case again before too long.

Seems to me we need more than a simple grain of salt to take with these 'don't worry, be happy' rationalizations.

Pass the shaker and pour it on, baby.


Please read disclaimer at bottom of blog.
Posted by Whisperer at 12:11 AM