Macleans Magazine: "Yes we're in a bubble and it will probably pop soon" 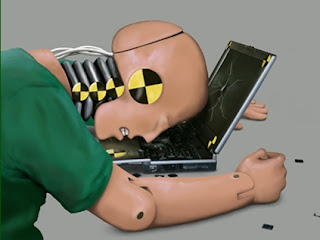 Oh my!
Yesterday we read about how a number of 'experts' were telling us that the Vancouver market wasn't going to crash and along comes Macleans Magazine with a slightly different message.
In an article titled 'What happens when Canada's housing bubble pops', the esteemed national magazine pulls no punches and declares:

"Yes we're in a bubble and it will probably pop soon."

Presumably they didn't speak to the same 'experts' as the Vancouver Sun. And Macleans take is very specific:

The signs of a bubble are unequivocal. At 13 years and counting, Canada’s current housing boom is one of the longest-lasting in the world... The real price of Canadian homes has increased by 85 per cent on average since 1998. Prices stagnated in 2008, at the height of the financial crisis, but they were back on the rise again as soon as 2009, when they grew by nearly 20 per cent, according to the Canadian Real Estate Association.
Meanwhile, Canadian household debt set a new record last year. On average, the debt burden of Canadian families stands at 153 per cent of their disposable income, according to Statistics Canada. That’s almost as much debt as American households had at the peak of their bubble.
The ratio of home prices to rents reflects returns that people can expect from homeownership–in terms of either rents earned by landlords or saved by owner-occupiers. Based on this measure, The Economist figures the Canadian market is overvalued by over 70 per cent. Last month, Merrill Lynch wrote in a report that our housing market is afflicted by “overvaluation, speculation and over supply.” No wonder a recent international survey of housing affordability found Vancouver to be the second-least affordable city in the world!
The scary part is that, by most accounts, 2012 is going to be the year when housing prices start heading south. The housing market is already showing signs of weakness... Meantime, the economy is slowing, unemployment has been on the rise since September and it will probably continue to climb as Ottawa reins in public spending. CIBC noted this week that job creation hasvirtually stalled in the second half of 2011, and a growing number of Canadians are resorting to self-employment, where they’re likely to earn 10-15 per cent less than full-time employees.

The reason this is frightening is that, even if uncertainty about the global economy forces the Bank of Canada to keep rates at current lows, Canadian households have no room to take on additional debt. Many will probably struggle to keep up with what they already owe.

Exactly.
The article goes on the make some assessments about why the market won't go "KABOOM" nationwide (some of which are wrong - but we'll save that for another post), but the magazine makes it clear Vancouver is close to "bursting."
I wonder if it's time for the Vancouver Sun to reconsult with 'their experts'?
==================