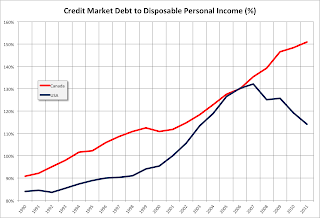 Seeking Alpha has joined the cavalcade of articles on a pending Canadian Real Estate collapse.  Of all the ones recently I found theirs particularly relevant.
Here is the body of their latest post on the topic...
==================
Canadians like to think they are 'different' than their southern neighbors. That is certainly true in some respects, but not in the accumulation of debt. Canadian households debt to disposable income versus that in the USA is shown in the above chart, however Canadians went quite a bit further in debt! Well at least that's different, right?
The above chart shows how Canadian households compare to their American counterparts. Canadian households held more debt (to disposable income) than Americans for every single year of data shown. American households started the process of deleveraging in 2007, but Canadians have yet to start.
Mark Carney, the Governor of the Bank of Canada (BoC), made a speech last year at the Vancouver Board of Trade about the Canadian housing market. Some of the highlights included:
Another difference between Canada and the USA is that you can't get a 30 year fixed rate mortgage in Canada, but you can in the USA. Canadians have to use ARMs (adjustable rate mortgages), or a maximum of 10-year fixed rate, but most Canadians use 5-year fixed rate mortgages and hence have to refinance every 5 years.
The day the BoC start raising rates (which they will one day), there will be homeowners in every market that cannot afford to refinance at higher rates and hence the default rate will rise.
Clearly there is a downtrend in the mortgage rates over the last 25 years, and this can't last forever.
The BoC will raise rates eventually and when they do a lot of households are going to have difficulty adjusting to the higher interest payment.
Canadian Banking System
Something should be said about the 'rock solid' Canadian banking system, which is another point of pride for us Canucks! I read a great article on ZeroHedge titled: Is The Next Domino to Fall… Canada? (Aug, 2011), which discusses the (in)solvency of various banks around the world.
The authors compared 30 of the world's large banks and ranked them by their TCE ratio (tangible common equity). One might expect most of these banks to be European, which is true, but 6 of them (or 20%!) come from Canada. Even worse, 30% of the banks that have 4% TCE or less are Canadian.
TCE is used to measure how much leverage a bank has based on its assets, and hence the lower this ratio, the more highly levered the bank is. TCE is a better judge of the financial strength of a bank than the average pundit's preferred measure: Tier-1 capital. This is because Tier-1 capital can be generated with snazzy accounting tricks, whereas TCE is based on actual equity (i.e.: customer deposits).
A McKinsey paper (Capital Ratios and Financial Distress: Lessons from the Crisis, Dec 2009) stated the following about TCE versus Tier-1:
When one considers the following points, it's easy to see that Canadian banks are not as 'rock solid' as commonly believed:
It's interesting to see that Canada's banks are already Basel-III compliant and also rated number 1 for soundness (and may need a government bailout) by the World Economic Forum, Global Competitiveness Report 2010-11. Regardless, when mortgage default rates start to increase in Canada, banks with low TCE ratios may quickly see their losses dwarf their assets, and it's possible Canada will have a banking crisis that requires a US-style bailout.
Conclusion
It is clear that the Canadian housing market has undergone a debt-fueled asset price inflation (i.e.: a bubble) that has greatly outpaced inflation. It is equally clear that Canadian home prices have not yet begun their price reversion to the mean.
On average, I suspect that housing prices will correct by about 25-30% across Canada, with some of the extremely overvalued markets (i.e.: Vancouver) declining more like 40% or more.

(Note: I still maintain Vancouver will decline in excess of 70% - Whisperer)
If the Canadian housing market crash behaves like the USA one, expect most of the losses to occur in the first two years, and then slow down after that.
Canadian banks will suffer, and may need a bailout. They are over-leveraged and over-exposed to housing market debt. I will not be surprised to see a Canadian banking crisis emerge in the next few years, and government bailouts to go with them.
Investment Action: shorting Canadian banks such as CM, BNS, RY, and TD. Also, shorting some home construction companies or commodity companies may work.
==================

Please read disclaimer at bottom of blog.
Posted by Whisperer at 9:06 PM