Wed Post #1: Conflicting messages. Should the Federal Government back off on their mortgage changes? 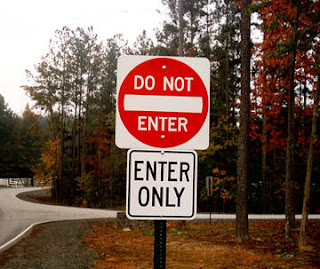 After dismal sales in March, April, May, June, July, and August; September was supposed to begin a fall surge that would lift real estate out of it's malaise this year.

Instead the worst September sales numbers on record has the real estate industry reeling in panic.

Unable to hide what's going on with their muddled statistics, the Federal Government is now getting the blame.

We all knew that was coming.

Never mind that sales were plummeting even before mortgage changes were enacted in July, the full court press is ramping up against the Federal Government to undo the mortgage regulations they recently imposed.

As if that was the cause of the problem.

The problem, as blog fans know all to0 well, is the housing bubble and the easy credit that fuelled this mess.

In 1999, the National Housing Act and the Canada Mortgage and Housing Corporation Act were modified allowing for the introduction of a 5% down payment. Just a few years earlier you needed to plunk down 25%.

In 2003 CMHC decided to remove price ceilings limitations and would now insure any mortgage regardless of the cost of the home.

In 2007, CMHC allowed people to purchase a home with no down payment and allowed them to amortize it over 40 years.

It was excess credit, credit which flooded the housing market... and prices soared.

And even though the 5% down payment was reintroduced in 2008 and maximum amortizations scaled back to 35 years in 2008, the Great Financial Crisis resulted in a tremendous slashing of interest rates. Emergency level interest rates negating the rule changes.

In that one statistic alone lies the housing bubble.

As real estate goes through withdrawal pangs from the partial removal of it's addictive drug (imagine the screaming if we had gone back to 25% down?), the Industry is having the shakes.

Rather than blaming liquidity for blowing a bubble to begin with, the Industry is attacking government for denying it the crucial drug they so desperately desire.

The Globe and Mail picks up on the Industry's wrath:

The federal government eliminated the approval of 30-year amortization periods on government-backed mortgages in June – and the decision’s impact can now be seen most vividly in the cooling off of Greater Vancouver’s market, with sales falling for everything from entry-level homes to luxury houses... Real estate sales across Greater Vancouver are sinking. There were 1,516 residential properties that changed hands in September in the region, down nearly 33 per cent from the same month last year. In West Vancouver, where the posh British Properties are located, the number of detached homes sold fell to 43 last month from 71 a year earlier.

The Industry's thrust is that the mortgage changes are hurting everyone, not just the entry level buyer. It's hurting you.  Ergo... you should pressure the government to turn the taps back on.

But should the Canadian Federal Government back off on the changes to the mortgage rules they introduced in June?

Eugene Klein, President of the Real Estate Board of Greater Vancouver certainly thinks so:

“There’s been a clear reduction in buyer demand in the three months since the federal government eliminated the availability of a 30-year amortization on government-insured mortgages. This makes homes less affordable for the people of the region.”

Bank of Montreal senior economist Sal Guatieri also suggested that there has been a domino effect in the Vancouver region.

As condo sellers - who can’t unload their places - aren’t able to then purchase larger residences, the result is a dampening effect in the overall market.

Even in the higher end of real estate, buyers who could borrow heavily in the past are no longer able to qualify for as much mortgage funding.

So these government policies are really hurting the Real Estate industry - and by extension - average Canadians, right?

Well... there's some conflicting opinions on this.  So let's ask some industry experts.

First up, Cameron Muir - Chief Economist of the BC Real Estate Association.

Mr. Muir... Eugene Klein is concerned buyers are staying away from buying real estate and that government policies are to blame. Your thoughts?

"I am predicting increased sales in 2013 because of continuing low interest rates, population growth and more full-time jobs."

"Employment growth in the ­Greater Vancouver area in the first ­seven months of the year has been 3.5 to 4 per cent ­higher than the same period last year. I would expect to see sales pick up before the end of the year, at least on a seasonally adjusted basis."

So the position of the BCREA is that Eugene Klein and the REBGV are completely off the mark with their concerns that the outlook for real estate sales is bleak because of changes to government mortgage regulations?

Let's check with another local expert, Tsur Somerville of the UBC Sauder School of Business.

Mr. Somerville... Eugene Klein is worried that there has been a clear reduction in buyer demand and this is a threat to the market. Will prices be going down anytime soon because of the government tightening of mortgage regulations?

"If there was a large number of unsold units coming onto the market or a huge change in the economic environment, that would really cause prices to tank. Most people don’t have to sell their house. You bought it for $200,000. The price is now $150,000. Unless you have to, why would you sell it?” For prices to go down ­significantly, you need people who have to sell, either because the economy has collapsed and they don’t have any income or developers have built a whole bunch of units that are unsold and the bank is screaming at them or foreclosing or something like that. None of those conditions appears imminent. It would take some negative shock, such as an ­economic meltdown or mortgage interest rates jumping from four per cent to nine or 10 per cent, to trigger lower prices."

So all these concerns that sales are stagnating, that this will prevent move up buyers, which will - in turn - fail to keep the market moving thus creating a domino effect leading to a drop in prices... this is all a load of shite?

Did you catch that Mr. Harper, Flaherty and Carney?


Please read disclaimer at bottom of blog.
Posted by Whisperer at 1:00 AM