One simple message right now: Pull the Boomer Trigger... before it's too late. 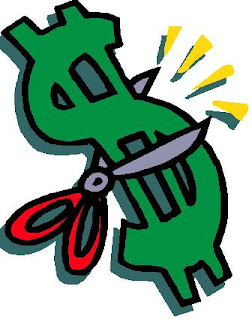 So for the past two days we have focused on Richmond real estate agent James Wong and his stunning assessment of where the real estate market is going.

Whether or not you question if the graph he originally posted (showing average prices cascading down 70%) was an accurate assessment of where he thinks the market will end up, his assessment on the state of the market is clear and precise:

If home sales and prices continue to slide, it could take many years before the market stabilizes.

Judging from the huge run up in home prices, the drop in prices on the way down could be just as severe. A market correction will take many years to reach a level when home buyers feel comfortable again to enter the market.

We are now witnessing the unwinding of the housing market. The severity and pace of price decline are dependant on the interaction of buyers and sellers perception of the market. At current price point, getting financing for a family earning $65,000 a year with 5% down payment will allow the buyer to afford a home valued at $294,000.

It will take many years before owning a home makes sense again. Home prices are not going up now or holding. Instead, the housing market is coming down in value. The rush to exit the market will take its toll on sellers who bought their homes recently.

One thing we didn't cover in the past two posts is his October market report that outlined the end of September sales statistics for Richmond.

Wong's conclusion at the end of it all is clear: if you want to sell, you need to cut your asking price significantly below current assessed value:

September home sales in Richmond did not reverse the low sales the preceding months in July and August.

With total sales of 173 homes, September home sales in Richmond turned out to be worst than the previous month sales of 179 homes.

Active listings for detached homes, townhomes and condos/apartments in Richmond at the end of September, 2012 totalled 2,663 units, was at about the same level in August, 2012.

The lack of buying interest was the main cause for slumping home sales in Richmond. In spite of some aggressive discounting by home sellers, buyers were not motivated to make their purchases.

The supply and demand for homes in Richmond deteriorated further in September, reaching 14.09 months compared to the previous month’s ratio of 12.51 months of supply.

Market sentiment has deteriorated further... The only way out for sellers who are determined to sell was to price their home more aggressively. Sellers who are taking deep cuts in reducing their selling prices are likely to sell their homes. Many homes that were priced according to the market, failed to generate much interest from buyers.

In the next 3 months, home sellers are likely to either pull their listings or allow them to go expired. Richmond detached homes are expected to suffer the most in price erosion.

Richmond detached homes over $1,000,000 are not seeing much buying interest. With total active listings of 686 and average sale around 28 homes the past 3 months, there are 24.5 months supply of homes in the market.

For detached homes over $1,500,000, there are currently 353 homes for sale. With an average past 3 months sale of 12 homes, this translates into 29 months supply of homes.

The decline in housing sales and home prices in Richmond will take many years to play out.

You get the feeling Wong will be the hit of the Christmas holiday house party circuit this year.

But it's not just James Wong who is bringing us the hard uncomfortable truth of the current real estate market. Vancouver West Side real estate agent Sam Wyatt is out with his October market report as well,

And judging from the title (October Real Estate Update: Attached and Condos Feel the Chill), you get the impression Wyatt isn't gunning for the Tony Robbins R/E Positivism Award either.

In fact Wyatt's message is remarkably similar to Wong's... if you want to sell, cut your asking price and make it a DEEP cut:

For the first time in over 6 months, the Months of Inventory (MOI) metric for Westside Vancouver houses dropped slightly. It had risen from 4.39 in February to 13.27 in August and in September sat at 12.14.

The big news for September is that both attached homes and apartments rose again, now to over 10 months of inventory. It might be that Months of Inventory has crested for detached homes but my sense is that it is still likely to get worse.

There were 86 houses sold on the Westside in September which is up from 75 in August but such a paltry number of sales can hardly be considered an improvement.

Even as sales improved, active listings increased from 995 in August to 1044 in September.

Apartments and attached homes are now really beginning to feel the chill of this falling market. With MOI over 10 months for each of these home types, we can expect to see prices fall.

In fact, the average price of an attached westside home has fallen to its lowest point since June of 2009 to $749,668.

Sales success ratios for the westside are still only about 30% which means that the vast majority of listings fail to sell. If you want to sell, you will need to price BELOW the most recent comparable sales prices and you need to do this from the very beginning of the listing. If you don't do this, your listing will almost certainly stagnate. I continue to succeed in making sales happen with this technique.

Wyatt's message to those rare real estate buyers who are actively searching the market right now?

More sellers are recognizing the change in this market and beginning to negotiate in earnest.

And negotiating in earnest is the only option right now.

Those hoping for Industry pressure to reverse federal government liquidity tightening measures are bound to be highly depressed at the latest news coming out about Canadian debt levels.

Canadian households are even more in debt than anyone imagined, according to a revised Statistics Canada calculation that gives a more accurate picture of family finances.

The revisions place household credit market debt in the second quarter at 163 per cent of disposable income, well above the previously reported 152 per cent.

The revision shows debt growth over the last decade that looks “eerily similar to the U.S. experience, just before their dramatic housing bust,” said David Madani, an analyst with Capital Economics.

“Overall, this supports our bearish view that Canada’s housing boom is unsustainable and the eventual correction, which we think is already underway, is likely to have a material negative implications for growth,” he said.

The revisions show a much steeper climb, with debt growing in each of the past six quarters.

The news has TD bank economist Diana Petramala saying that the overall results show Canadian households are more vulnerable to a housing correction than previously thought.

Although Canadians hold more assets than their counterparts in the U.S. and the U.K. did before the crash, most of those assets are locked into the value of their homes, which could take a tumble in a housing correction or if the economy tanks.

So if you are a Boomer at the front of the Boomer retirement wave (with tremendous unrealized capital gains sitting in a bubbled valued piece of real estate)... what is the crystal-clear message being conveyed right now?

If you bought your property more than 20 years ago, and you have the ability the move significantly on price... DO IT!

Can you say Boomer Trigger?


Please read disclaimer at bottom of blog.
Posted by Whisperer at 1:02 AM