It's not just the million dollar homes falling below assessed value 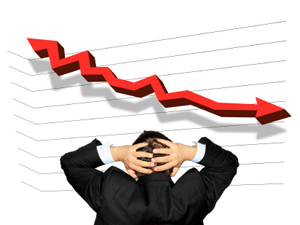 Reading this blog you know we are watching the comments of the likes of BCREA chief economist Cameron Muir and UBC Sauder Associate Professor Tsur Somerville with keen interest.

Last month we have Somerville saying:

This week he changed his tune and said Vancouver home prices could drop by 10% next year.

"we don’t see a recession on the horizon, and we don’t see interest rates going up any time soon, so what kind of financial calamity is going to happen in Vancouver to get people to sell for 75 cents on the dollar?”

Some have suggested that these are these extreme examples and that no such worry exists on the lower end of the spectrum where the average Vancouver income earner resides.

Without getting into the debate about whether the 'average Vancouver income earner' is into million dollar properties or not, a quick check of the comment section on the excellent blog Vancouver Condo Info turns up an immediate example to reference (hat tip Teddybear).

Here is an example of a Vancouver condo from a lower price range.

This is #2905-438 Seymour Street in the downtown core of Vancouver (click images to enlarge): 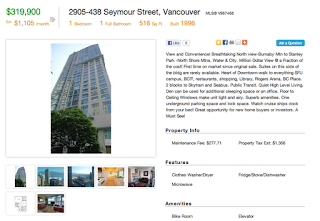 Now for those that discount that a $70,000 asking price cut (detractors will tell you idiots can always ask wild prices, doesn't mean squat in the big picture), the real test comes when we look at the assessed value:

So in a so-called 'flat' period (according to Somerville), the owners of this property have cut their asking price to more than 15% below assessed value.

Toss in another 10% drop in value next year (again... according to Somerville) and you have a property that would come in at 25% below assessed value.

Muir wants to know what is going to happen in Vancouver to get people to sell for 75 cents on the dollar?

Perhaps he should give the folks at 498 Seymour Street a call and ask them?

I suspect it has something to do with the fact that the listing indicates that this is the first time this unit has been on the market since the original sale.

The building was built in 1996. Since then we have seen a huge loosening of credit (which triggered our massive housing boom -see our post here).  As a result it's not hard to surmise we have a situation very similar to the Boomer Trigger - i.e. people can move on price, so they will - and in doing so they still get out with a healthy capital gain.

This is an element that both Muir and Somerville appear to completely ignore. Many of these people selling for below assessed value aren't taking 75 cents on the dollar for their original 'investment'.

It's a factor could wind up having a profound effect in the coming year.

If anyone knows the original purchase price of this unit, it would be nice to compare that to the current asking price/current assessed value  - let us know.