You can almost smell the desperation. In Richmond the new reality is $1 million homes which only fetch $750,000. 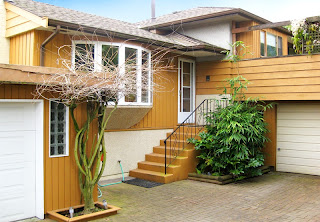 As you read the various real estate board press releases that have come out this month, the consistent theme has been 'sales are down, but prices holding firm.'

But if you read this blog on a regular basis, you know that simply isn't true in the Vancouver suburb of Richmond, a community that was once the darling of HAM (Hot Asian Money).

About three weeks ago we told you about 7920 Shackleton Drive.

Richmond realtors have been telling you for months now that if you want to sell in Richmond, you must not only list your property below the current assessed value - but you must aggressively price it as much as 15% less than what other listings are going for if you hope to sell.

And lest you think 7920 Shackleton Drive was a one-off example, let me introduce you to 3900 Francis Road (pictured above).

On September 29th, 2012 this craigslist ad appeared (click on image to enlarge):

Proclaiming that their new asking price of $898,000 (for a house with an assessed value of $1,020,000) was a price that had just been reduced by $90,000; the property is promoted as the 3rd lowest of 37 properties available in the Seafair neighbourhood in Richmond.

Apparently, though, that wasn't enough.

Because today 3900 Francis Road has an even newer reduced price. 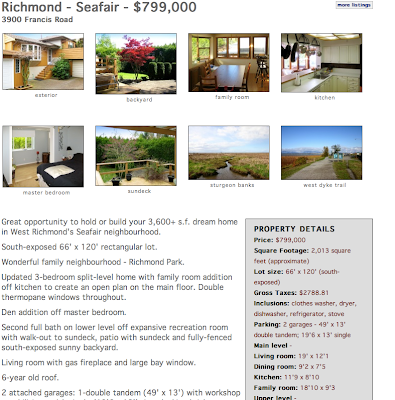 Yep... merely a week later and another $99,000 has been slashed from the asking price.

In Richmond it appears the new reality is that homes assessed at $1 million can only reasonably be expected to fetch you $750,000 today.

What will it be like in a few months?

I wonder how many will have the foresight to get out while they can?


Please read disclaimer at bottom of blog.
Posted by Whisperer at 8:55 AM