How far could prices drop if the bubble truly bursts? 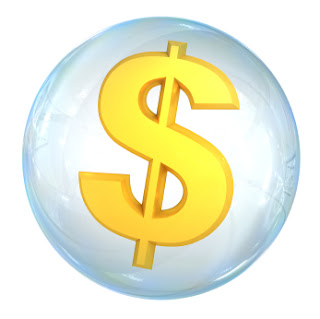 In our last post we provided a brief history of the changes to the mortgage rules over the past 13 years.

The moral of the post being that houses haven't risen in value the past decade... access to credit has been increased and THAT has driven up the value of houses.

Withdraw the access to credit... and the housing boom will turn to bust.

It reminds me of cars and the tricks car sales people employ to sell expensive cars to buyers.

A car sales friend once told me that the customers who got the best deals on buying a car almost always focused on the selling price of the car, and not on monthly payments.

Often people will go into a car dealership and look at a car but decide it is too expensive for them.

A salesman asks how much you are willing to pay each month, and you throw out a number—say, $450. He asks how much more you could afford—just getting a feel for you. You tack on another 50 bucks. In your mind, you were theorizing, but to the salesman, you just committed to a $500 minimum monthly payment.

Even if you balk at the $500 minimum monthly payment, the salesperson will ask you what he has to get that monthly payment down to so that he can make the sale.

You tell him the monthly payment has to come down to $440 a month so you’ll be able to meet other monthly obligations.

When the salesperson tells you he can get it down to $460, you are disappointed. You tell him that you won’t make the deal at this price, that the payment had to be reduced to $440 or less, or you’ll take you business elsewhere.

After hearing your ultimatum, the salesperson asks: “If I can get your payment down to $440 per month do we have a deal and you drive this car home today?”

The salesperson now has you right where he wants you.

First, you really want this new car. Second, you are  focused on monthly payments instead of the selling price and terms of the loan.

Why is this bad for you?

Let’s watch what happens next.

Incredibly, the dealership comes back with a monthly payment of $440 per month. This is exactly what you wanted. A reasonable person sees a drop of $60 per month in the payment structure (from $500 to $450) and does a little math to see how much is saved.

However, you are only concerned with his monthly payment.

You didn’t notice that the dealership reduced your payment to $440 per month by extending the term of the loan from 48 to 72 months instead of lowering the selling price of the car.

The dealership was able to lower your payments but now you are paying $31,680.

And for many buyers this works because it's all about the monthly payment.

15 years ago car payments were spread - at most - over four years.  Now you can get 84 or 96 month car loans... loans that simply facilitate ridiculous increases in car prices.

In many ways this is what has happened to houses.  Let's take a look at a very simplistic example.

A young couple has their heart set on their dream house, but it's too expensive.

They go see a mortgage broker and, with the assistance of the federal government's mortgage rule changes to "make houses more affordable" the leverage effect of reducing the down payment from 10% to 5% and an amortization of 25 years moved to 40 years all has the same effect as the car dealer's shell game.

Toss in emergency level interest rates and instead of the 20 year historical average of a five year mortgage @ 8.25%, you have an interest rate of 2.99%.

And since other couples had access to that same easy money; it basically triggered bidding wars to obtain that very same1995 $370,000 house.

Now before you jump all over these numbers, this is a very simplistic analysis. But it shows you basic fashion how the true value of houses never went up... it was the access to credit that increased, which in turn fuelled rising prices.

In 2012, however, that access to credit is being turned off.

And what goes up will just as quickly come down.

How significant could the drop be?

They say all bubbles created by excess credit burst and return - at minimum - to the values in place when the bubble started to inflate (and often overshoot that return).

Let's look at realtor Larry Yatkowsky's last average price graph to get an idea of where we started (click on image to enlarge): 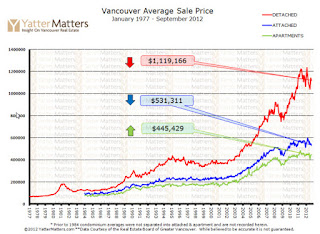 You pick where the bubble appears to form.

If you now connect the dots to see how our real estate bubble was created (by excess credit), and If understand that all bubbles created by excess credit burst and return - at minimum - to the values in place when the bubble started to inflate (and often overshoot that correction)... you can now appreciate how significant the looming downturn might truly be.

For those who haven't seen it before... an excellent primer on asset bubbles by Chris Martenson.


Please read disclaimer at bottom of blog.
Posted by Whisperer at 8:25 AM