Meanwhile... in the USA... a perfect storm is brewing to hit the Canadian HELOC situation

If you happen to come across this week's Macleans Magazine,  you will see the above small excerpt in a segment Macleans calls Good News/Bad News.

"The US housing market is back on sold ground. Housing prices rose for the third straight month in July in all 20 cities in the Standard and Poor's Case-Shiller index.  With homeowners feeling richer, consumer spending is likely to increase, leading to a wider economic boots. Indeed, this week consumer confidence in the US rose to the highest level since February.  There is some reassuring news here, too, for Canada, which appears to be in the midst of a housing correction, if not a crash. Where the US economy goes, Canada's always follows, sooner or later."

Reassuring words, to be sure. Except when you consider that if we are to follow the US 'sooner or later', we have a significant drop to traverse before we begin to recover.

Besides that 'not-so-minor' point, to say that the US housing market is on solid ground right now is a stretch, at best.

Especially when you scratch the surface to discover the source for some of that resurgence.

One of those cities on the rise is Phoenix, Arizona.

Phoenix was one of the cities at the epicentre of the subprime mortgage implosion and witnessed property values which plunged more than 50%.

Now Phoenix is on the rise.

Apparently Canadians have been flocking there for the past few years and have been buying everything in sight.

Macleans focuses on this a few pages later in the same edition with a story titled, "Attack of the Snowbirds". 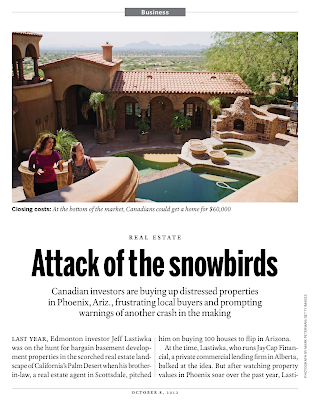 According to Macleans, Canadians were the largest foreign buyers of American real estate last year representing a quarter of all international buyers.  Contrast that with who came second (Chinese buyers - the infamous HAM). Chinese buyers represented 11%.

And when it comes to Phoenix, Canadians represented 96% of all the foreign buyers there (and most of those were from Alberta and British Columbia).

All of this Canadian 'investment' has helped move Phoenix into the top 10 US markets for foreign commercial real estate investment in the second quarter of this year.

The high Canadian dollar and cheap real estate are proving to be an irresistible lure.

But the kicker comes when you take a look at how Canadians are financing their purchases.

Banks in both the US and Canada are refusing to provide mortgages for foreign investment properties.  So where is the money coming from?

Apparently some of it is from cash, but a lot more is coming from lines of credit.  Home equity lines of credit to be precise and studies show HELOC withdrawals are the most popular way for Canadians to access the cash they are using to buy Phoenix property.

The influx of cash has caused home prices to rise so quickly in Phoenix that prices are up 10% in the past year (compared to the historical average of 2-3%).

Macleans quotes Lynda Person, a Scottsdale real estate agent who buys properties at auction and flips them, who says;

"It's kind of alarming when investors are paying, in some cases, more than anything that's been on the Multiple Listings Service and the stuff on the MLS is not distressed."

This exuberance has banks now holding back onto their foreclosed inventory in the hopes that prices will be pushed up even more.

A study last year found that banks were holding onto around 11,000 foreclosed properties in the Phoenix area.  That number doesn't include the roughly half of Phoenix homeowners who are still underwater on their mortgages (a number well above the national average of 30%).

It is expected that many of those underwater homeowners will be walking away at some point, severely exacerbating Phoenix's shadow foreclosed property inventory.

It is a looming situation that has many local experts predicting that Phoenix's property values could go plunging once more.

And when it does, all those Albertans and BC'ers will be trapped.

Add it all up an you have an insane, perfect storm brewing.

As Canadian real estate melts away even further, pressure will build on our huge debt situation.   The tightening of HELOC regulations has already begun to restrict money Canadians have to buy Phoenix property.

As the melt continues, Canadians with massive HELOC's will be threatened in Phoenix and at home.

Canadian buying in cities like Phoenix (coming largely from BC'ers and Albertans) will evaporate. The massive Phoenix shadow foreclosed home inventory will again flood the market.

Not only will these BC'ers get hit hard by evaporating equity in Canada... but their US properties will collapse as well.

This double whammy will trigger an unanticipated wave of foreclosures in BC that could conceivably hit Tsunami levels.

It won't be a complete replay of the California experience.  There will be no US-style housing collapse in Canada.

Incredibly we have managed to find a way to forge our own, unique, Canadian collapse.


Please read disclaimer at bottom of blog.
Posted by Whisperer at 10:44 PM