Touching a nerve: Was a Richmond real estate agent forced to remove a graph plotting a potential 70% decline in housing prices? 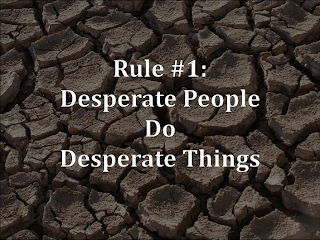 On Sunday we told you about Richmond real estate agent James Wong.

Wong has, over the past few months, regularly published the abysmal real estate sales statistics from the former HAM infused Vancouver suburb and given clients his frank and honest assessment of what it would take to sell your home in these conditions.

Wong's commentary is a refreshing change from the rah-rah boosterism we are used to hearing from the real estate industry.

With each passing month, as conditions continue to worsen, Wong has become even more straightforward with his analysis.

The ultimate from Wong was released this past Sunday.

Titled, Are We Headed For a Housing Market Downturn? Wong outlined a very bearish scenario for real estate over the coming months and years and predicted (with a graph) a 70% decline in real estate values.

However, if you go to his site today, you will not see the exact same article as you would have seen if you went there on Sunday.

Oh, don't get the wrong idea.  James Wong still makes the same case he did two days ago. But a significant element has been removed.

Here are 2 screen shots that capture Wong's original Sunday post. Click on these images to enlarge them and see if you can spot what has changed: 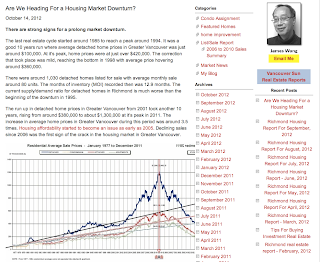 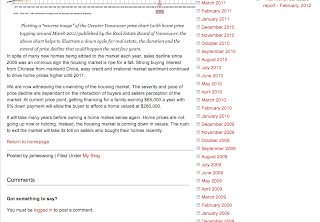 Contrast those screen shots with this screen shot of his current post: 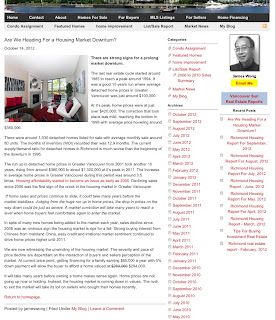 In the original post Wong took a stab at predicting where things might be going by plotitng a “reverse image” of the Greater Vancouver price chart (with home price topping around March 2011). He hypothesized how a down cycle for real estate might play out, including the potential duration and extend of the price decline over the next few years.

Wong's chart was a classic tracing of the formation of a bubble and how a bubble unwinds.

(For a great video on 'Bubbles and how they unwind' by Chris Martenson, see this post from June 5, 2009).

Regrettably it appears Wong's chart was censured because the chart has been removed and replaced by this passage (click on image to enlarge):

A disclaimer was also added at the bottom of the post which reads:

Clearly Wong's chart touched a nerve and so much negative feedback that he was forced to remove the industry graph he modified to make his case.

To Wong's credit, he maintains his belief in his original message.

But it gives you an indication of just how significantly his observations have touched a nerve.