It's Different Here - you believe that, right? 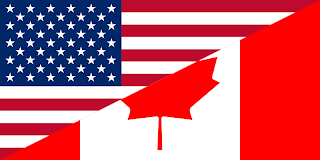 A few wandering thoughts this morning for you.

One of the comments you will hear on a lot of 'bear blogs' is the statement that "we will not have a US-style housing crash. Our crash will be uniquely Canadian."

It is a sentiment this blog agrees with and it came to mind while reading the Globe and Mail this morning.

If you followed the US Housing Bubble and collapse, you know that one of the elements that lead to the creation of the bubble was securitization.

Because mortgages were packaged and sold off, the risk of lending the money was removed from the individual organizations that originated the mortgages.

Basically the fee's and incentives paid out for initiating these loans are criticized as the basic reason many loans were issued for amounts greater than should have been made, and to people who shouldn't have received them.

Homes weren't properly appraised, values were inflated to justify loans, and loans were made on faulty data.

This blog wrote several posts detailing this process and if I can track down the exact posts I will link to them.

Of course things like that don't happen in Canada.  Our 'sound' banking system didn't make many of the mistakes that contributed to the US housing collapse... or so the myth goes.

Enter the article from the Globe and Mail:

Flaws in a national databank that helps determine the value of houses across Canada have helped fuel inflation in home prices, putting mortgage lenders and borrowers at greater risk, key players in the housing sector have warned.

Documents obtained by The Globe and Mail detailing confidential statements from banks, appraisers and mortgage insurers show rising worry over the use of a database operated by the Canada Mortgage and Housing Corporation (CMHC).

Introduced in 1996 as a way for the CMHC, banks and other lenders to quickly and inexpensively determine how much money can be lent against a residential property, the database known as Emili is relied upon too heavily by lenders.

Emili is an automated system that uses figures such as recent sales of nearby homes to gauge values, without sending an actual appraiser to the address.

However, the potential margin of error in calculations may pose significant problems.

For home buyers, or homeowners with home-equity lines of credit, an inaccurate valuation by the database could allow them to overpay or borrow much too heavily for the home, industry members argue.

For banks, it could mean the collateral they have against the mortgage is not worth as much as believed.

“Although it provides very rapid responses, this automated approval system has significant shortcomings,” says one industry respondent in the documents, which were obtained by The Globe and Mail through access to information requests. Because the database does not evaluate a specific property, but uses generalities to determine the risk level of a mortgage, “CMHC insured loans are often granted without truly taking into account the property’s market value,” the respondent says. “This poses a real danger of altering housing market data.”

Canadian home loans being made without truly taking into account the property's actual market value?

Really? Didn't we just say that the American's did something similar (but different) in their housing bubble?

It's interesting when you take a look at the wikipedia page on the Causes of the United States Housing Bubble, other similarities pop up with our Canadian situation.

On the subject of down payments.

Some borrowers got around downpayment requirements by using seller-funded downpayment assistance programs (DPA), in which a seller gives money to a charitable organizations that then give the money to them. From 2000 through 2006, more than 650,000 buyers got their down payments through nonprofits.

In Canada, didn't many people get around down payment requirements here by using bank-funded down payment assistance programs (cash-back)? The new OFSI regulations have shut that door, but this program has played a huge role in creating our bubble too.

And didn't the US have something called 'liar loans'?

A stated income loan is a mortgage where the lender does not verify the borrower's income by looking at their pay stubs. These loans are nominally intended for self-employed borrowers, or other borrowers who might have difficulty documenting their income. Stated income loans have been extended to customers with a wide range of credit histories, including subprime borrowers. The lack of verification makes these loans particularly simple targets for fraud.To address the problems arising from "liar loans", the Internal Revenue Service updated an income verification tool used by lenders to make confirmation of borrower's claimed income.

Don't we have something similar In Canada?  Stated income loans have been prevalent here until just recently when the OFSI shut the door on this lending tactic too.

Hmmm... is Canada really all that different?

In the United States inflationary pressure caused by such factors as increased fuel and housing costs, and changes in foreign investments in the U.S. economy, triggered an increase in interest rates. The US Federal Reserve raised interest rates 17 times, increasing them from 1% to 5.25%, between 2004 and 2006.

This triggered the collapse of the housing bubble.

In Canada, the Bank of Canada has been sounding the alarm for months now that there will be a "normalization of interest rates" and that Canadians must heed these warnings vis-a-vis their debt situation.

We have also seen changes in foreign investment here, a factor that some are blaming for the vaporization of HAM (Hot Asian Money).

When you consider that our real estate market is already "softening", does anyone care to speculate what will happen as the Bank of Canada rates rises from 1% to 5.25% (possible pushing mortgage rates back to the historical average of the past 20 years of 8.25%) ?

Even without an increase in interest rates, what will a declining market mean for mortgage holders here?

There will be no US-style housing crash in Canada. It will be uniquely Canadian with variants on the US experience.

I can't help but wonder how bad it would have been in the United States if things there were like Canada.

Consider this for a moment.

Those 'riskier' borrowers had to arrange 1-7 year mortgages with mortgage rates that 'reset' after those short term periods (1-7 years).  They called these borrowers 'sub-prime' borrowers.

When property values fell, these people were severely hurt when it came time to renew their mortgages.  The domino effect these people had on the housing market was severe.

How many people do you know in Canada with mortgages that last longer than 5 years before their interest rate 'resets'?

Our entire nation is made up of mortgage holders that are as vulnerable as the 'sub-primer's' in the United States were.  What will be the impact here if the real estate market continues to 'soften'?

We won't have a US-style collapse. Ours has the potential to be far worse that anything the Americans went through.


Please read disclaimer at bottom of blog.
Posted by Whisperer at 12:30 AM