The Euro: which way will it go? 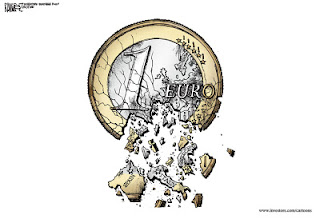 Is the Euro doomed?
The BBC broadcast a documentary today about the euro crisis. Their conclusion? The powers that be will prop up the euro at any cost because the alternative is financial Armageddon.
Contrast that with this article in the UK's Telegraph newspaper which tells us Lloyd's of London is preparing for a Euro collapse.

The chief executive of the multi-billion pound Lloyd's of London has publicly admitted that the world's leading insurance market is prepared for a collapse in the single currency and has reduced its exposure "as much as possible" to the crisis-ridden continent.


Richard Ward said the London market had put in place a contingency plan to switch euro underwriting to multi-currency settlement if Greece abandoned the euro.
In an interview with The Sunday Telegraph he also revealed that Lloyd's could have to take writedowns on its £58.9bn investment portfolio if the eurozone collapses.
Europe accounts for 18% of Lloyd's £23.5bn of gross written premiums, mostly in France, Germany, Spain and Italy. The market also has a fledgling operation in Poland.
The contingency planning comes as German politicians piled the pressure on Greece ahead of elections on June 17.
A conservative member of German chancellor Angela Merkel's cabinet said today Germany would not "pour money into a bottomless pit".
On Sunday, Swiss central bank chief Thomas Jordan admitted his country is drawing up an action plan in the event of the euro's collapse.


The critical decision at the G-8 meeting and several of the bilateral meetings that took place on the sidelines of the Camp David gathering centered on the decision to plunge ahead with the bailout of the European banks in an effort to save the Euro system, with Greece still inside. President Obama is terrified that a financial meltdown of the Euro system will spill over into Wall Street and result in his losing the November elections. Behind the scenes around Camp David, Christine Legarde put the IMF squarely behind a bailout of the European banks, with the full backing of the Federal Reserve and Treasury in the United States to boost the leveraged lending of the European Central Bank (ECB) to prop up the European banks. ECB will take junk bonds and other vastly over-priced assets as collateral for loans to the Spanish, Greek and other European banks. This will offset an additional estimated $500 billion in new write-offs by bondholders of Greek debt.

The bottom line is that if Greece leaves the Euro, the contagion will spread overnight to Spain, Portugal, Ireland, and, perhaps, even Italy. So, the IMF, the Obama Administration and the ECB are all on board to further delay the reality of the financial and banking crisis through hyperinflationary measures. The idea is that the situation will take many months to fully play out, and Obama and his re-election team hope that the system will hold together past the November elections.

Please read disclaimer at bottom of blog.
Posted by Whisperer at 8:02 PM