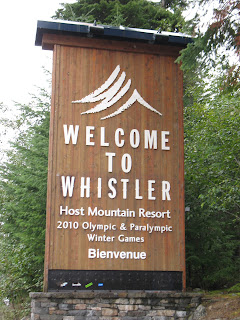 It's been over a month since we last cast our eyes northward to Whistler and noted property owners had begun dumping properties to cut losses while they could, and over two since we noted some properties were selling for 50% of their previous values.
The winter ski season is now over and by all accounts it was a highly successful one courtesy of Whistler’s epic snowfall levels.
Several room-night records were broken, and Whistler Blackcomb’s latest quarterly results, released May 9, show increases in both revenue and skier visits. Overall, room nights are expected to be at least 10% higher than last winter.
So businesses should be leaping for joy, right?
Apparently they're celebrating by closing up shop. 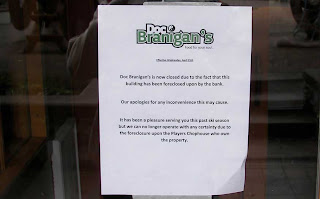 One of the local news rags, The Pique, is reporting that Doc Branigan's restaurant is now closed due to the fact that this building has been foreclosed upon by the bank.
Will they locate somewhere else in the Village and re-open?

"Branigan's was working toward changing the liquor license so the restaurant could offer more entertainment varieties in the space but, a spokesman said, (but with this development) the shareholders decided to cut their losses and cease operations."

The Elephant & Castle restaurant in the Delta Whistler Village Suites has also stopped operations.
Property manager Drew Meredith said Calgary-based restaurant chain Original Joe's has purchased the Elephant & Castle brand and the new owners of the chain have no plans to open an Original Joe's outlet in Whistler.
In the village itself, the doors of the Pizza Café are also closed and have been for more than a week.
The European café at the corner of Lorimer Road and Main Street appears to have also closed. The cafe is notable because the owner, Miro Kolvek, was one of the six candidates in the running for the job of mayor in the last municipal election.
The Savage Beagle nightclub also closed last month.
The foot and apparel store Merrill, located in the Village Centre beside Eddie Bauer, is preparing to shut down. Store manager Dave Booth said June 27 will be the final day of operations.
Food Plus in Creekside is also closing, and Loka Yoga is looking for a new location starting June 1 after receiving notice that its rent is being more than doubled.
And it's the last tidbit that has some wondering if it isn't time to reexamine the way the municipality conducts business. The lifeblood of any municipality are it's taxes. Are Whistler's simply too high?
According to Loka Yoga’s owner the rent at the Saint Andrews House location where they had set up shop was set to jump from $2,500 to $6,700 per month!
Why the huge jump? Apparently it costs $12 per square foot each month just to cover property taxes in a Village commercial space. If that figure is accurate, that’s $8,400 per month for a 700 square foot space — just to cover the property taxes.
Whistler is now beginning to face the dreaded deflation scenario. As property values drop, revenue from property taxes falls. Meanwhile businesses, hurting from declining revenues, cannot afford the property taxes currently in place, let alone handle any increase to offset the drop in revenue from property owners.
And any cut in the tax rate can only impact municipal amenities, services which are crucial in a resort destination like Whistler.
The hard times are only just starting for the Sea-to-Sky community and the catch-22 is under way.
(hat tip to Patiently Waiting for the news links)
==================

Please read disclaimer at bottom of blog.
Posted by Whisperer at 11:00 AM

Email ThisBlogThis!Share to TwitterShare to FacebookShare to Pinterest
Labels: Whistler