The smell of desperation? 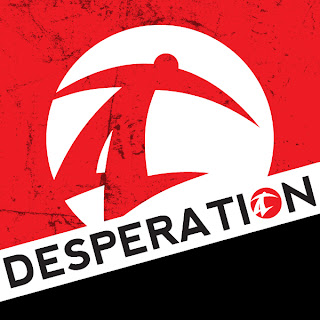 Faithful readers will recall posts we made at the end of March about the Marine Gateway development in south Vancouver.
It garnered notoriety as the first pre-sale condo sellout in Vancouver in over six years... an odd occurrence considering the slowing market conditions.

Even stranger was the fact that media reports documented less than 150 people in line for the sellout of 415 units in four hours.
It prompted us to wonder aloud if the Marine Gateway development hadn't fallen prey to the common industry practice whereby the marketer responsible for hawking the development strikes a deal with realtors who want to be exclusive agents to sell in the complex.  These realtors often have to pick up 5 to 10% of those options each. Once the complex is finished and all the developers suites are sold, then these realtors can sell theirs.

It means that these exclusive agents could actually be responsible for buying up to half of the pre-sales condos made available to the general public.
Did this occur at Marine Gateway?
Is this how an estimated 130 people in line triggered a sell out of 415 units in a record four hours? Was it because these exclusive real estate agents secured half of the units (and the best ones at that... those which came with some of the limited parking spots and are the best candidates for future resale)?
Is this why, as noted on Global TV, those buyers who did actually line up early were disappointed they could only secure 1 bedroom condo units, units that were part of the contingent that came without an available parking spot?
The Marine Gateway sellout generated much needed R/E hype for the 'developments on rapid transit line' theme.

As we noted, Rennie Marketing Systems was launching a whole new theme which shifted the mantra of "location, location, location" to one of "transportation, transportation, transportation."
We observed that in the months ahead, Rennie would be expanding on this theme as he went to market with 3 more developments along the rapid transit system:
Well fast forward over a month.
The first of those upcoming developments, the pre-sale of 300 units at another Canada Line Station - a development known as Mandarin Residences, has come and gone... with little fanfare.
According to the title page on their website (click on image to enlarge) only 203 of the 300 units pre-sold on opening weekend... a far cry from the instant sellout at Marine Gateway: 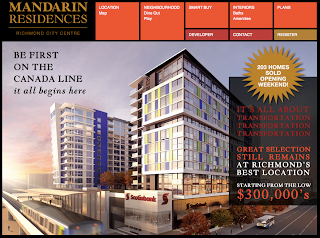 I wonder how many of those 203 'sold' units were assigned to the exclusive realtors at Mandarin Residences?
If half of the 300 units went to realtors (150 units), could it be that less than 50 units actually sold to buyer's/investors?

Is this why Global TV wasn't invited to cover that pre-sale?
I raise this question because if as few as only 50/300 units actually sold, then it would be desperation time with those 'exclusive realtors'.
And just how desperate might they be?
Would they be so desperate to as to beat the bushes of the internet to shill their condo in the comments section of a bear blog such as this one?
May I draw you attention to a comment made today as part of a recent Richmond post on this blog (click on image to enlarge):

Normally I delete shill comments which link to this product or that one. But this one I'll leave up.