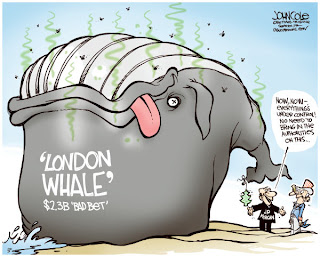 Now... faithful readers know my position on precious metals, particularly Silver.
And if you have followed my posts on this, you know the significance of JP Morgan and Silver.

So when a story about JP Morgan suffering massive losses hits the news waves, it tweaks my interest.
The big buzz around JP Morgan lately has been the massive amount JPM lost in the London Whale fiasco, a massive derivatives trading loss.

I'm not going to go into it here. If you aren't aware of the story you can read Time Magazine's coverage of the story to catch up.
For those who have been watching the story, the estimation of the loss sustained by Morgan is growing significantly.  The story is slowly becoming the first possible detonation of the derivatives time bomb many pundits have waiting for.
The big speculation right now revolves around the announced cancellation of JP Morgan's stock buy-back program by JPM president Jamie Dimon.
The story begins when the Federal Reserve Bank of New York announced stress tests on various banks. The sole purpose of these stress tests was to determine under what worst case scenario the Fed was ok with allowing JPM and various other Bank Holding Companies to proceed with dividend raises/stock buybacks.
(In a particularly cheeky move, JPM front ran the full FRBNY stress test release and announced just such a dividend raise and stock buyback plan)
The FRBNY, via it's "Comprehensive Capital Analysis and Review 2012" reported the permissive gating conditions, which if met, would still enable JP Morgan to proceed with the then announced buyback. The highlighted section below details the results (click on image to enlarge):

What this chart tells you is the cumulative "realized losses/gains securities (AFS/HTM) and Trading and Counterparty Losses" for JP Morgan amount to $31.5 billion for the pendency of the stress test.
In English it means that $31.5 billion is how much pain JPM is allowed, in the NY Fed's view, to suffer before losses and dividends/buyback programs would jeopardize the capital structure. If this amount of loss is achieved, any buyback process should be halted.
As mentioned above, the big buzz around the financial world is that JP Morgan announced yesterday that their share buyback process has been halted.
As a result speculation is running rampant about just how big the CIO P&L loss JP Morgan has suffered as of the close of business yesterday truly is.
Does this imply that the CIO losses, as conferred by JPM to the Fed in private, have a statutory loss potential of over $31.5 billion through Q4 2013?
Has the Fed now barred JP Morgan from any other future buybacks, i.e., capital outflows, until such time as the trading/realized loss has been offset and the hit to the balance sheet has been undone?
Jamie Dimon originally announced the loss as $2 Billion.
Last night the London newspaper, The Independent, announced that the losses could now be over $7 Billion.
Warrren Buffet once called derivatives, "financial weapons of mass destruction."
They are complex and difficult to understand. And this is a story that may grow in complexity with each passing day.

How much has JP Morgan actually lost on this derivative deal gone bad?