New for Monday evening: Amoss, in his own words, on Bank of Montreal...

Here, in Dan Amoss's own words, are some of his thoughts on the Canadian banking system.

Everyone thinks they’re safe from the current financial crisis.

No one thinks they’re doomed.

I’m talking about the Canadians, of course.

See, lately, I’ve read a lot about the superiority of the Canadian banking system. And naturally, my contrarian instincts took over.

The financial press loves Canadian banks. On May 19, The Wall Street Journal ran a piece suggesting that these banks are a model of sustainability, and now have the opportunity to acquire U.S. banks on the cheap:

Canada’s biggest six banks account for more than 85% of the assets in the country’s banking system. By and large, these banks made a smart decision to avoid securitization. Securitization refers to loans that banks originate, bundle together, and sell off to pension funds, money market funds, insurance companies, and other institutions.

But this doesn’t mean that Canadian banks have no credit risk. On the contrary, they have plenty. Mark to market accounting has not yet cut down Canadian bank earnings, because the Canadians have not yet accounted for the impending wave of mortgage, consumer loan, and corporate loan losses.

They will by the end of 2009. It’s impossible to avoid. And just to give a perspective on how quickly lending grew at the Canadian banks, the chart below shows that assets at the top six Canadian banks grew from C$1.3 trillion in October 1999 to C$2.7 trillion in October 2008. Equity at these top six banks grew in line with assets; all six kept their ratios of assets to common equity fairly constant since 1999. 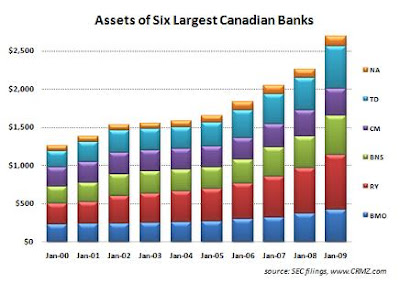 Growth in assets, even if accompanied by growth in equity, is always a risky proposition for banks. At the time the loans are made, everything seems fine. Then, when a serious recession arrives, and a dramatic credit loss cycle begins, the market value of loan portfolios can rapidly decline by 5% or 10%, pushing the banking system to the edge of insolvency. Insolvency is when the value of assets is less than the value of liabilities. Bank regulators don’t like this scenario and pressure weaker banks to raise very expensive, dilutive equity capital in order to protect more senior lenders, including depositors, from suffering losses.

Canada has just entered what will ultimately be an enormous credit loss cycle, and by the time it’s over, the Canadian banks could easily lose their pristine reputations. Until the middle of 2008, Canada’s economy was booming. Its mining, energy, and manufacturing sectors are world-class, and every other sector was pulled along for the ride.

But the wheels fell off last fall. According to Statistics Canada, the unemployment rate rose to 8.4% in May — the highest in 11 years. Ontario, with its heavy manufacturing base and ties to the “Detroit Three” auto companies, is especially hard hit; Ontario lost 234,000 jobs, or 14% of its entire manufacturing work force, since last October. Ontario will lose even more jobs this summer as GM and Chrysler dramatically cut auto production. Alberta has slowed dramatically too. Just a year ago in Alberta, every skilled construction worker was working overtime on oil sands projects. Now many projects are postponed and workers are getting laid off. The unemployment rate in Alberta nearly doubled from May 2008 to May 2009, to 6.6%, and is heading higher.

For Canada, this credit cycle will probably be worse than the one in the late 1980s. According to RBC Capital Markets, annualized loan loss provisions for the entire Canadian banking system peaked at 2.88% of all loans in 1988. As of April 2009, this figure was just 0.77%. Over the next year or two, loan loss provisions should easily triple or quadruple, which would cut deeply into profits and capital…sending the worst of the Canadian bank stocks down.

So how do you play it?

I recommend you dig in to the major banks to figure out the one with the most exposure to unemployment rates.

And guess which bank that is?

Please read disclaimer at bottom of blog.
Posted by Whisperer at 5:58 PM