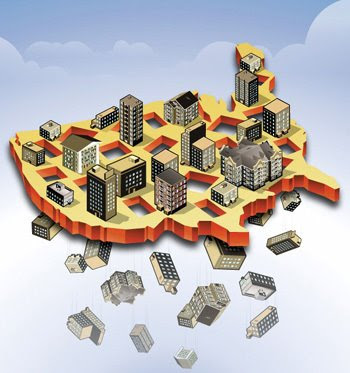 Last week the Vancouver Sun carried a story out of New York that proclaimed home prices in major US cities rose in May for the first time in nearly three years.

The closely watched Case-Shiller home-price index, put out by Standard & Poor’s, marked its first increase since July 2006. The index gained 0.5% in May from the previous month.

A small increase, to be sure, but after several months of sharp declines of 2% or more the increase was hearlded as a welcome sign of stability for the U.S. housing market.

This turnaround in housing market statistics is considered significant because it will help stabilize the U.S. banking system and encourage more lending, which would help get the economy on the mend.

But... as always... the news might not be as good as it appears.

This week two analysts for Barclay's (one of the leading providers of personal loans and mortgages) came out and disputed the statistics.

Barclays' analysts Ajay Rajadhyaksha and Glenn Boyd wrote that while the S&P/Case-Shiller index for May showed the first month-over-month price increase since 2006 and a 2 percent seasonally adjusted annualized drop, a more-accurate reading probably would have been an annualized decline of 10 to 15%.

"Seasonally adjusted home-price data has been skewed higher during the spring months of this year and last year by an 'amplified' version of typical patterns, according to the analysts. More homeowners sell their properties during those months, cutting the share of foreclosed homes being offloaded at distressed prices, as new buyers focus on 'desirable neighborhoods' where values hold up better."

"Data reflecting a reversal of the seasonal benefit, as well as a tide of new foreclosure sales' as a moratorium on the seizing of homes put in place by banks subsides, will lead to 'renewed weakness' in the fall," they said.

Rajadhyaksha and Boyd project that U.S. home prices will fall an additional 11% on average before bottoming next year, bringing the total decline to 40% nationally from their peak.

The Barclay's analysts are raining on the parade of some soothsayers who are seeing green shoots that indicate the recession is nearing an end. They cling to the belief that this would mean that even if prices and economic activity don’t shoot back up to boom levels, they would at least stop falling.

But the Barclay's analysts are seeing the same thing that we have been talking about on this blog... another mortgage problem looming on the horizon before this whole situation calms down.

The bulk of Option ARM's are going to reset in 2011. These are the ‘pick a payment‘ mortgage products that were marketed as perfect for sophisticated buyers with growing incomes.

The problem was they could quickly get out of hand if the buyer chooses the negative amortization route. In the US about 40% of these loans made in 2006 - 2007 are already delinquent.

New Barclay's Capital research shows that the recasts in the next year or so are expected to be a minor event. But by mid-2011, these borrowers are forecast to see payments that are 50% to 80% higher than what they are grappling with now. (Many of these option ARM's are concentrated in former hot-spot real estate markets, such as California and Florida.)

Loan modification attempts by banks don’t seem to be working with these particularly noxious loans.

In the face rising payments, borrowers don’t have an incentive to keep up with their current payments for homes that are already so horrendously under water, i.e. the loan amount is far above the current value of the property.

Barclay's says that many of the option ARM loans that do get modified turn delinquent soon afters anyway.

They’ve crunched some numbers and forecast that 95% of the loans that are slated for modification will eventually default.

If you think that sounds bad, get this: They say that 80% of the option ARM loans out there that are ok and up-to-date as of right now will eventually default, too.

There's a heap o' mortgage pain still on the horizon. Pain which is going to wreck havoc on the U.S. banking system, continue to impair lending, and further prevent the world economy from mending.

Please read disclaimer at bottom of blog.
Posted by Whisperer at 2:51 AM

Email ThisBlogThis!Share to TwitterShare to FacebookShare to Pinterest
Labels: US Banks, US Economy, US Housing