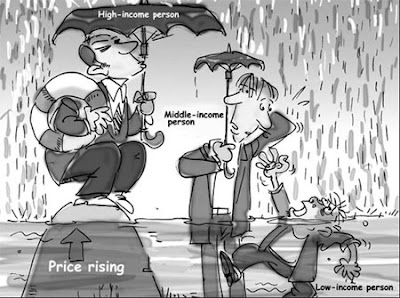 Despite the fact 'official' statistics have inflation in negative territory, mainstream media is starting to pick up on what everyone can see and can't be denied... inflation is present.

In a Globe and Mail article, it is pointed out that even with the consumer price index (CPI) at a 56-year low, Canadians are feeling the pinch as food inflation persists.

And that's because food prices were one of those items removed from the CPI in the early 1990s.

Statistics Canada reported yesterday that food prices were 5.6% higher in grocery stores in July than they were a year ago, and 3.4% higher in restaurants, although the overall inflation rate fell by 0.9% year-over-year.

Restaurants' food costs jumped by 6.7% in the first seven months of 2009 and labour costs also rose, with the minimum wage increasing by an average of 6.9% across the country this year.

With labour and food accounting for 70% of the cost of doing business, restaurant operators are in a vise.

As much as restaurateurs would like to cut prices to attract what's left of the discretionary dining dollar, they are hard-pressed to do so.

“They're hanging in there, but their margins are getting thinner and thinner. Many restaurant operators are getting by on profit margins of 3%, 2%, even 1% in some jurisdictions,” said Garth Whyte, president of the Canadian Restaurant and Foodservices Association.

How can restaurant's raise prices and draw customers when all the public hears is that inflation is supposedly not there. "Prices are doing down, not up!", says the indignant consumer as he walks away.

Meanwhile bond investors are not duped by all the talk of negative inflation. In an article titled 'Bond Investors Gird for Inflation' we see that Canadian real return bonds have been outperforming conventional government bonds during the past month. Real return bonds could continue to outperform for several months, according to Merrill Lynch Canada Inc.

Real return bonds are domestic government bond issues that pay investors a rate of return that is adjusted for inflation as measured by the consumer price index, including food and energy. Unlike conventional bonds, this feature assures investors' purchasing power is maintained regardless of future rates of inflation.

Bond investors are already looking for protection from inflation. Perhaps they can see exactly what the Governor of the Bank of Canada saw when he warned two weeks ago that "the era of ultra-low interest rates are coming to an end and Canadians should prepare...".

It seems bond investors are.

Please read disclaimer at bottom of blog.
Posted by Whisperer at 12:34 PM