Is the Bank of Montreal in financial trouble? 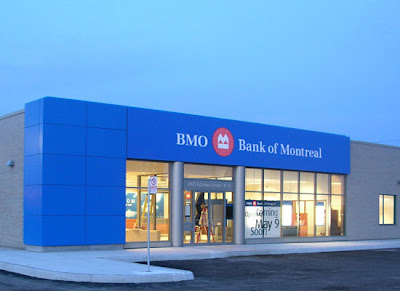 A number of US-based finance blogs are abuzz with rumours about the Bank of Montreal.

Dan Amoss is the Managing Editor of Strategic Investment, a highly respected US newsletter. According to Amoss – who is famous for calling the crash of Lehman Bros, Bear Sterns and other giants before they failed – a major bank is lying about its ability to pay shareholder dividends, has been gaming its books, and is about to crash.

Amoss doesn’t say which bank he’s talking about, but gives the following hint:

A quick Google search reveals that this can only be the Bank of Montreal, also known as BMO Financial Group.

Stock Gum Shoe – a website devoted to guessing at the companies hinted at in stock tips - confirms that Amoss was talking about Bank of Montreal.

US financial blogs are all agog about this bit of news because Canadian banks have widely been seen as the world’s safest and most stable banks. Indeed, the Bank of Montreal was listed as the 33rd safest bank in the world by Global Finance.

Amoss says this bank won’t be able to pay the promised $1.5 billion dividend scheduled later this year, which will precipitate a crash in BMO’s stock by December.

The following is from www.stockgumshoe.com:

“On Monday, August 24th, at noon, Dan Amoss will expose the biggest banking lie of the past 64 years. Given the past 21 months of market action — that’s no small claim. If recent mainstream headlines make you believe that banks have weathered the storm. You better think again. Dan’s caught another major bank he thinks is lying about being able to pay their massive $1.5 billion dividend scheduled for 2009. He believes this bank’s using every shady accounting trick possible to hide losses from their shareholders."

The newsletter that Amoss writes is called Strategic Short Report and it promises to release details about this soon-to-fail bank in it's August 24th issue.

As a teaser, Amoss has given the following clues to this bombshell:

We already know their annual dividend tallies up to about $1.5 billion.

“With a 192 year old history and 37,000 employees, its crash would drop like an A-bomb on unsuspecting shareholders...”

“And, in a warning sign I’ve never seen before, this bank’s own employees are speaking up — questioning management about the fudging of numbers on their most recent earnings conference call.”

“Here’s why Dan thinks this Bank will get slammed. It all boils down to a few very simple things. This bank made risky loans to people who, unfortunately, are losing their jobs quickly. Without jobs, these people won’t be able to pay the bank back. The bank management is using accounting tricks to hide these losses from their shareholders, while some of the same executives even appear to be quietly dumping their own shares at peak prices. But they can only ‘fake’ it for so long. If those loans finally default, it’ll set off a cascading effect of losses... lower earnings… and a draining of cash. With no cash, regulators could force this bank to cut their massive dividend. And this dividend cut would force their share price to plummet — maybe as much as 50-75% in a day — as folks race for the exits.”

Amoss believes BMO is essentially cooking the books with their loan losses and such, and that he seems to think that a collapse is imminent.

Right now it's all rumour and innuendo.

However there are several reports on the web that do indicate that a Bank of Montreal analyst was asking somewhat snippy questions on the last conference call about the expected losses and the accounting thereof.

I have no idea if that’s unusual or not, I’m not a habitue of bank conference calls, and I don’t know whether or not analysts who are employed by the bank giving the call typically kowtow to the CEO and CFO or ask tough questions.

BMO has been reporting profits every quarter — but of course, a bank has lots of ways of reporting profits even if they’re not genuinely profitable, as Dan implies, and we have certainly seen plenty of evidence that banks can go from profitable juggernaut to pile of rubble in a matter of weeks if their projections turn out to be overly optimistic. Whether or not Amoss is correct that this will be happening to BMO, I have no idea — analysts are still predicting that they’ll be recording profits for this year and next, and that the shares trade at a forward PE of about 10, which is a lot lower than the valuations of many of the big US banks … but then again, the big US banks fell a lot further, too, and have much more of a “snap back to profitability” investment thesis behind them.

The issue is drawing keen US interest because last Fall, when Citigroup and Bank of America were begging for bailouts, many investors started to think of all of the big Canadian banks as a sort of safe haven in the financial sector … after all, the shares collapsed “only” 50-60% in 2008, not the 95% that many US banks suffered through.

BMO, for one, is actually just about even with where the shares traded a year ago, which is something you can’t say about a lot of big American banks.

Amoss is expected to suggest that this safe haven allure has blinded investors to the fact that many of the Canadian banks have the same kind of asset-writedown problems coming as do the banks in the United States.

That’s just a guess, but let's face it... Canada’s economy is weak thanks to our close ties to the US. BMO and our other Canadian banks are global banks now, so they’re getting a taste of the global slowdown.

Amoss claims BMO is in trouble because of their exposure to the oil and automobile industries and to the communities impacted by unemployment in those industries, and because they have not been earning enough to cover the dividend (a dividend cut at BMO would, in Amoss’ opinion, cause the shares to crash).

Interestingly BMO's next quarterly report is due on August 25, the day after Dan Amoss is scheduled to release his report. Amoss also implies that the dividend cut might come as soon as with this August earnings release.

Right now it's all rumour.

But next week has the potential to put Canada on the world stage, front and centre.

Please read disclaimer at bottom of blog.
Posted by Whisperer at 2:17 AM