US Banks: failures in a more 'traditional' manner 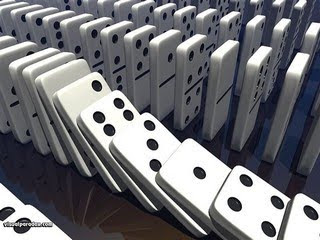 It's bank failure friday and the full effects of the housing correction are starting to take hold in the United States.

As noted by the New York Times in this article, it is becoming clear that most of the bank failures this year have nothing to do with the strange financial products that seemed to dominate the news when the big banks were nearing collapse (Bear Sterns, Lehman Brothers, etc.).

The current wave of failures are from banks that are now losing money. They are going broke the old-fashioned way: They made loans that will never be repaid.

Those loans will never be repaid because they have been made for mortgages that were sound three years ago, but are now hopefully in excess of what the property is now worth.

More importantly they were made to homeowners who were, at the time, solid, employed borrowers.

As the defaults compound they are destroying many small US banks who did not get in over their heads with derivatives or hide their bad assets in off-balance sheet vehicles. Nor did their traders make bad bets; they generally had no traders. They did not make loans that they expected to sell quickly, so they had plenty of reason to care that the loans would be repaid.

But no matter. The loans are going bad, in some cases with stunning rapidity, in volumes that they never thought possible.

The sizeable drop in real estate values is triggering underwater mortgage conditions all over the United States. Homeowners are defaulting because of this condition and pulling their banks down with them.

This is exactly the condition that the Bank of Canada (and the real estate industry) have been desperate to stave off in Canada.

Jim Wigand, the F.D.I.C.’s deputy director of resolutions and receiverships, says banks that are failing now are in worse shape — in terms of the amount of losses relative to the size of the banks — than the ones that collapsed during the last big wave of failures, from the savings and loan crisis of the late 1980s/early 1990s.

The absence of problems in the middle of this decade was taken as proof that nothing very bad was likely to happen. Any bank that did not lower its lending standards from 2005 through mid-2007 would have stopped growing, simply because its competitors were offering more and more generous terms.

In Canada, the industry believes they have staved off disaster. So banks have returned to making loans with 0 down and 35% amortizations.

"Two years ago, when the subprime mortgage problems began to surface, Washington took great comfort from solid balance sheets, which regulators thought meant the banks could easily weather the problem."

Those in charge dramatically misread the situation.

If the economy does not restore itself quickly, and sales of US government debt push interest rates higher... then next year we will reading about the massive risks to our country posed by the huge number of loans made this year to first time buyers with little or nothing down and 35-year amortizations.

It won't be a pretty picture.

Please read disclaimer at bottom of blog.
Posted by Whisperer at 2:21 PM