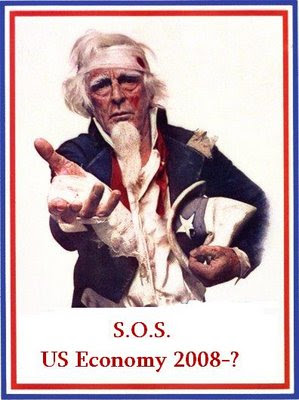 Let me expand on Saturday's concerns about the economic outlook.

The most recent data on outstanding credit card and auto loan amounts was released on Friday.

How can the U.S. economy expand if consumer credit continues to contract?

It's important to note that consumer credit contains no housing related debt at all. So it begs the question... how sharply are outstanding home equity lines of credit and home equity loans contracting?

I bet you that they are contracting even faster than consumer credit and auto loans.

Speaking of homes, interesting presentation by the San Diego County Assessor/County Clerk David Butler on Notice of Defaults (NODs) and foreclosures in the county.

The following is a handout from the presentation (click on image to enlarge). 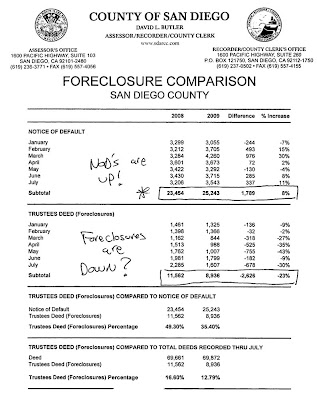 San Diego real estate broker Edgewood121 attended the presentation and advised that San Diego county is "expecting a wave of foreclosures in the near future and they are gearing up for it" (quoting Edgewood121 paraphrasing Butler).

Butler thinks the banks are holding back, probably because of the various government programs.

Edgewood 121 was left with the impression that "it is [only] a matter of time before more properties become available." And that the only reason prices appear to have stabilized "is because of the artificial choking-off of inventory, thereby creating urgency and multiple-offer scenarios."

This situation is being repeated all over the United States.

Clearly banks are hoping that the modification programs will reduce the number of foreclosures. However, as we said last week, most loan modifications just capitalize missed payments and fees (so the banks can pretend they are still whole), and reduce interest rates for a few years (so the homeowner can pretend they still own something of value).

Extend and pretend... that's all the banks are really doing right now. Which is fine until the coming wave of commericial and prime mortgage defaults hits.

Meanwhile there is the topic of personal bankruptcies.

Last week I commented that bankruptcies in the United States were up 600%. Now comes word from the UK newspaper, the Independent, that the United Kingdom registered a record 33,000 people insolvent in the second quarter of the year, the largest number ever recorded.

Insolvency experts warned that the combination of rising unemployment and the lack of stigma attached to insolvency options meant the number of people affected would go on rising.

"The overall record level of personal insolvencies, whilst at first shocking, hides the detail which suggests the worst is yet to come," Mr Sands warned.

On that note, did you catch Treasury Secretary Timothy Geithner's missive to Congress on Friday?

Geithner urged elected US officials to raise the $12.1 trillion debt ceiling since, according to current projections, that limit may be reached as soon as mid-October.

Said Geithner, "It is critically important that Congress act before the limit is reached so that citizens and investors here and around the world can remain confident that the United States will always meet its obligations."

Ummm... anyone care to explain to me what is the point of having a 'ceiling' if, as you get near that limit, you simply raise it time after time again?

How twisted is the logic that passes for policymaking in Washington that it becomes critically important that the limit be increased before it is reached?

Geithner says its important because investors may lose confidence in the entire system if it isn't raised.

You mean to say investors won't lose confidence because the United States has a spiraling debt so large that the government has to raise the absolute 'ceiling' they have imposed on that debt every few months?

And investors won't lose confidence because there seems to be a total lack of any realistic plan that would see the money repaid?

But somehow these same investors will, apparently, lose confidence because lawmakers hadn't paid close enough attention to the relationship between the debt and the debt 'ceiling'. And if lawmakers fail to move the ceiling upward when conditions required such action, this will trigger a loss of confidence?

As I said on Saturday, this economic maelstrom is not over, we are experiencing the calm that comes when the 'eye' of an economic hurricane passes over us.

As any weather watcher knows, once the 'eye' passes the back end of a big storm always hits harder than the front end.

Please read disclaimer at bottom of blog.
Posted by Whisperer at 12:34 AM

Email ThisBlogThis!Share to TwitterShare to FacebookShare to Pinterest
Labels: US economic stimulus, US Economy, US Federal Treasury