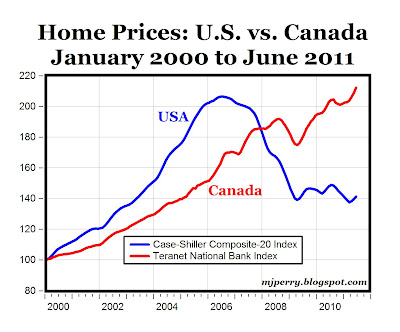 
The rise in U.S. home prices during the early 2000s was dramatic and occurred because of  massive government interventions in the housing and mortgage markets.


In Canada we had a lower but more sustainable rate of home price appreciation. The height of our housing bubble came later than the Americans because the hard core intervention didn't start here until 6 years later. The Conservatives gave us the zero down, forty year mortgage. They allowed Canadians to raid RRSP's for down payments. They created the Home Reno Tax Credit. They gave us the first-time buyer's closing cost gift and they instituted the infamous 'emergency interest rate'.

As we said yesterday, Harper's Conservatives have given us more pro-real estate initiatives in the last five years than Canadians have seen in the last quarter-century.

And as you can see by the chart, our market has been propelled even higher than that experienced by the Americans.


It really shouldn't come as a surprise then that since our real estate market didn't start receiving it's hard core juicing until 6 years after the Americans started jacking theirs... that our collapse may not start until 6 years after the Americans imploded (2006 vs 2012).
Our home price increases are not sustainable. And we will not escape the same experience as the Americans, the Irish, the British and now... as we have started to see this year... the Australians.