Fri Post #1: In search of HAM on Vancouver's West Side 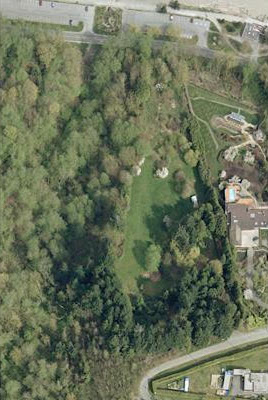 Above is an aerial view of a property out near the University of British Columbia that is the quintessential example of greed chasing Hot Asian Money.
Located on Vancouver's ultra tony far west side, the property in question is a combination of 4883, 4889 and 4899 Belmont Avenue. Most observers can only look at the shenanigans going on there and shake their head.
Profiled recently over on VREAA, the property was once home to Frank Mackenzie Ross, lieutenant-governor of B.C. from 1955 to 1960. At that time, an elegant home graced the property.
But that house burned down decades ago, leaving the property empty but for a rough, cedar-shake pavilion that still stands overlooking the ocean.
In the early 2000's the property was bought and flipped several times but nothing was ever built on it.
Then, in 2005, the property was sold to a Hong Kong investor (Rosy Palace Investments) for $10.8 million.

The new owner attempted to do some 'improvements' before trying to flip their acquisition and gained significant notoriety in the process.
In conjunction with the realtor selling the property (Paulo Leung), the new owner was accused of illegally clear-cutting the land of 65 mature cedar, fir and maple trees which were bull-dozed into huge slash piles.
The clear cut was an attempt to access the property's spectacular views of Vancouver's English Bay.
In 2005 the City of Vancouver issued an Administrative Report requesting injuctive proceedings and warned propective buyers about the legal proceedings the City was undertaking.
City of Vancouver engineers said geotechnical conditions created by the clearcut were ripe for a landslide along the slopes of the property and threatened to collapse on a salmon steam below in neighboring Pacific Spirit Park and a short distance from the Spanish Banks public beaches.
The end result was a $200,000 fine for Leung and a very, very unstable mud lot (with stunning views).
In 2007 the property was reported to be on the market for $14.8 million.
It never sold.
The property is back on the market now, presumably after some time to allow all the negative publicity to die down and after some time to repair the unstable hillside created by the clear cut.

It's also back with a heafty price increase.
Instead of the 2007 asking price of $14.8 million, now the asking price is $28.6 million.
Even more laughable is the current realtor's description:
And that's what Real Estate is like in the City on the Edge of the Rainforest righ now... a game.
Because if you add in the $200,000 fine plus the renovations required to shore up the hillside to conform with geotechnical conditions, does that really justify a $14 million increase in the price of a property that doesn't even have a mansion on it (or any house for that matter)?