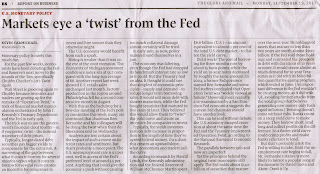 As it turned out, that was the outcome... the sole outcome... of the FOMC meeting.  By implementing 'Operation Twist', US Federal Reserve Chairman Ben Bernanke swapped 400 billion in short term treasuries for 400 billion in long term treasuries.
The move has no effect on the overall balance sheet since the total debt remains unchanged. But it supposedly stimulates the economy by driving down interest rates across the board - loans, mortgages, credit cards, etc.
Bernanke believes that by lowering interest rates on longer dated maturities it will cut long-term interest rates boosting investment in both housing and business.
The problem is is that interest rates are already at levels twice as low as they were the last time "Operation Twist" was implemented in 1961.
And if the lowest rates in 50 years aren't spurring a demand for credit in the economy - why does Bernanke believe a further decline will do the trick?
During the previous 'Operation Twist' the economy was experiencing a increasing trend of growth. Interest rates were also steadily rising as stronger economic growth allowed for higher rates of interest to be charged. Debt, as a function of GDP, remained well constrained at low structurally manageable levels.
Beginning in 1980, the economy shifted and interest rates began a very steady descent. This decline of interest rates led to a massive expansion of debt which ultimately sowed the seeds for slowing rate of growth in the economy.
Our problem isn't low interest rates.
Our problem is that we have massive amounts of excess debt.  And that excess debt literally drains the demand for more credit.
For businesses, access to credit is not an issue.
Poor sales are their number one concern and the lack of demand on their businesses do not warrant adding on more leverage. The number of businesses currently thinking this is a good time to expand is at some of the lowest levels on record.
Likewise, consumers, are trying to pay down debt as worries about job security, rising food and energy costs and stagnant wages reduce their desire to consume and make debt reduction a priority.
The excess debt that has been accumulated over the last 30 years as interest rates were in a steady decline, lending standards were reduced and massive pools of available credit were supplied has now begun the inevitable unwinding process.
It's exactly what Japan have been going through for the last 30 years.
In the early 1980's Japan experienced their own real estate/credit bubble bust.
Japan has attempted virtually everything the US Federal Reserve has tried.  They lowered interest rates, made liquidity injections and utilized currency deflation in order to restart their ailing economy.
None of it has worked.
The heart of the problem is debt.
A credit induced boom has led to a massive period of malinvestment. It's that credit induced malinvestment which lies at the heart of our housing bubble.

What we are going through right now isn't a  normal economic recession. The system is trying to clear the excess debt but Government keeps intervening and retarding the process.

Government has to get out of the way and allow the system to clear the excesses.

Debt must be destroyed and cleared out.  Bad investments (and those who made them) must be allowed to fail.

The housing bubble must be allowed to burst fully.
Banks must be allowed to fail.
But that would be deflation and those in power aren't prepared to let that happen. Helicopter Ben has already told you what he will do when faced with deflation.
In a November 21, 2002 speech Bernanke said the government in a fiat money system owns the physical means of creating money. Control of the means of production for money implies that the government can always avoid deflation by simply issuing more money. He said "The U.S. government has a technology, called a printing press (or today, its electronic equivalent), that allows it to produce as many U.S. dollars as it wishes at no cost." He referred to a statement made by Milton Friedman about using a "helicopter drop" of money into the economy to fight deflation.
Today the stock market is dropping like a stone. Investors thought Bernanke was ready to fire up the helicopter with the last FOMC meeting.  All month long they have been watching the date of that meeting and waiting, anticipating.
But all they got was 'Operation Twist'.
It doesn't mean it isn't coming.  It just means Bernanke wasn't ready to take that step this month.
It will come.
==================

Please read disclaimer at bottom of blog.
Posted by Whisperer at 10:34 AM