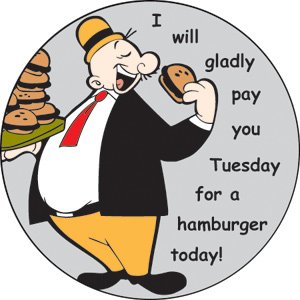 US President Obama's joint speech to Congress can be boiled down to a couple of simple points.
The Teleprompter President kicked off the 2012 Election Campaign by trying to seize the initiative in a bitter ideological battle with Republicans.
In 14 months voters will decide whether to give him a second term.
And with his poll numbers at new lows, with 9.1 percent unemployment, Obama is taking on the Republicans and setting the tone by calling the current state of affairs a “national crisis.”
To revive the stalled economy and avert another recession Obama told Congress he will introduce his “American Jobs Act.”
If the Republicans vote it down, he will use the issue as the basis for his re-election campaign.
The bottom line is his 'plan' will cost $447 billion by the end of this year.
How will he pay for it?
The idea is to offset the cost with deficit reductions.
Like a tired, old stage play the formula is always the same with a refrain like Wimpy, the Popeye cartoon character: "I will gladly pay you Tuesday for a hamburger today."
QE to infinity is well underway.
==================

Please read disclaimer at bottom of blog.
Posted by Whisperer at 8:00 PM