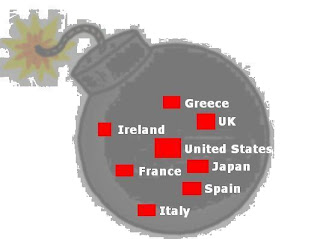 Some interesting comments yesterday on Bloomberg by ABN Amro Group NV Chief Executive Officer Gerrit Zalm.
Fears are spreading rapidly that Europe is on the verge of experiencing a Lehman Brothers Moment, a bank credit crisis the likes of which plunged the world into financial mayhem in 2008.
At the heart of the issue is the arcane shadow banking system in Europe (just like it was in North America in 2008).
That system is so crucial to USD-crunched European banks and it is now apparent that it is not just Greece, or the PIIGS, that is the problem.  But now the entire Eurozone is at risk.
Everyone in Europe is completely dependent on the dollar generosity of the European Central Bank, and the various other regional central banks for liquidity.
It is clear that the US Federal Reserve will once again be forced to step in, "in size" and bail out the world.
You may recall that on August 11th, 2011, we posted on one of the news stories that flowed well under the mainstream media radar screen: the results of an audit of the US Federal Reserve conducted by the Government Accountability Office (GAO).
This was the first ever audit conducted of the US Federal Reserve in its 100 year history.
The audit indicate that the Federal Reserve dished out $16 trillion in emergency aid to U.S. and foreign banks, corporations and governments in what the Fed calls all-inclusive loans during the financial crisis.
$16 Trillion!

In all the Fed disclosed more than 21,000 transactions which it utilized after Lehman failed to push as much liquidity into the worldwide financial system as possible to stabilze things.
Fast forward to today.
This time it is far more debatable if the world believes that even the Federal Reserve is sufficient to prevent a rising global insolvency tsunami.
To have none other than ABN AMRO's CEO on the record complaining loudly about liquidity gives you an idea of just how serious this issue is.
The last thing a bank wants to do is give any indication of funding weakness.
Yet here is Gerrit Zalm talking about a dollar liquidity crunch and the difficulty European banks are having procuring the world's reserve currency.
If you think there are any doubts about QE3, let alone QE4, 5 and 6... think again.
==================

Please read disclaimer at bottom of blog.
Posted by Whisperer at 12:05 PM