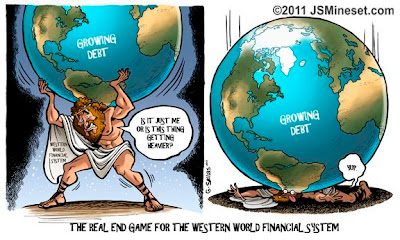 Yesterday we posted about the 2011 Great Global Bailout wherein the US Federal Reserve, the European Central Bank, the Swiss National Bank and the Bank of England have been working in concert in order to make liquidity available to prevent the European banking system from collapsing.
This is similar to what happened in North America in the autumn of 2008.
The blog, The Golden Truth, had a great examination what it all means.
In it's simplest terms European banks have dollar liabilities (shorter term loan funding of various sorts denominated in dollars) that are being used to finance non-dollar income-producing assets (mostly denominated in euros). Greek and Italian sovereign debt securities, for instance.
The assets are falling way short of being able to support the cash flows required to fund the liabilities so the European banking system is at the brink of "freezing up" and collapsing.
This 'liquidity problem' exists despite the fact the US Federal Reserve has had a $500 billion swap "liquidity" facility available for use, a resource that has been in place for awhile.
Even more startling, it turns out that some big U.S. banks have been engaging in private market repo transactions with some big Euro banks, who have been using crappy collateral.
It shows how desperate European banks have become for cash.
But why are the big U.S. banks willing to take crappy collateral in exchange?
Traditionally repos are done using very short term Treasuries or Agency debt as collateral. Why would U.S. banks be willing to take this crap to keep Euro banks solvent? And why is the US Federal Reserve extending half a trillion of Taxpayer-backed funding to keep the Euro system from collapsing?

Analysts believe it is because if countries like Greece, Italy and Spain collapse, then the too-big-too-fail Euro banks collapse.
And if that happens, North America's  too-big-to-fail banks - primarily Citibank, JP Morgan and Goldman Sachs - would collapse under the weight of a very large amount of credit default derivatives and interest rate swaps that require Euro bank counter parties to be able to fund in the event the default parameters are triggered.
In other words, U.S. banks and the US Federal Reserve are just as desperate to keep the Euro banks alive as are the ECB/SNB/BOE bank members are desperate to stay alive.

This scenario is startlingly similar to what happened right before Lehman was allowed to tank, which triggered the big bailouts here. Only this time the scale is Lehman x 50 or 100 because it includes a couple of countries and all of the U.S./UK/European/Swiss To-Big-To-Fail Banks.
The global financial system is in a highly precarious position right now and it explains why the past week has seen relentless raiding on Gold and Silver by the paper shorts.
The bankers knew that the USA and all major central banks were orchestrating a massive dollar injection into Europe as the European banks were strapped for dollars.
==================