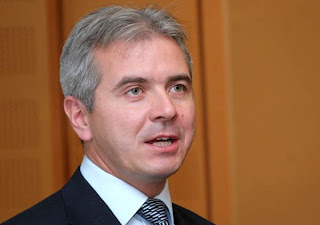 Two days ago it was Alessio "BBC Trader" Rastani's gloom and doom musings on Europe that garnered all the attention.
Today it is Attila Szalay-Berzeviczy, head of UniCredit global securities (Italy’s biggest lender) and former Chairman of the Hungarian stock exchange (pictured above).
Bloomberg is reporting that Szalay-Berzeviczy has written an OpEd piece in which he claims that the euro is “practically dead” and Europe faces a financial earthquake from a Greek default.
Sounds familiar, doesn't it?
Of course this is just "one scenario among many". Szalay-Berzeviczy offers this ray of hope:
All Europe has to do is print, print, print.
Pity they can't print more Gold and Silver too.

Please read disclaimer at bottom of blog.
Posted by Whisperer at 10:36 AM