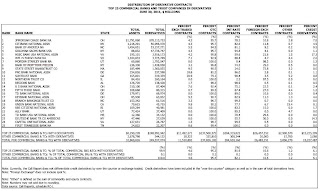 The idea that the Federal Reserve might need to 'engineer' a stock market crash has been brought up numerous times over the past two years in the blogosphere by other commentators.
Articles like "Will the Fed Engineer a Stock Market Crash to Flood the Bond Market With Much Needed Demand?" have surfaced on many occasions.
As the current year has moved along, it has become abundantly clear that the Federal Reserve must initiate another round of Quantitative Easing.
The problem is that, rather than helping the economy, the last round of Quantitative Easing just pushed commodity prices through the roof. Especially the price of Gold, Silver and Copper.
So the pressure on the Fed not to ease has become immense.
It has lead many to wonder if the Fed might allow the stock market to tank in order to facilitate demand for QE3.
In the midst of this debate, as commodity prices have gone through the roof, the topic of derivatives has added an interesting angle.
The latest quarterly report from the Office Of the Currency Comptroller was just released and it presents in a crisp, clear and very much glaring format the fact that the top 5 banks in the US now account for a massively disproportionate amount of the derivative risk in the financial system.
Specifically, of the $250 trillion in gross notional amount of derivative contracts outstanding (consisting of Interest Rate, FX, Equity Contracts, Commodity and CDS) among the Top 25 commercial banks, a mere 5 banks account for 95.9% of all derivative exposure.
Earlier today Zero Hedge pondered if Morgan Stanley is sitting on an FX derivative time bomb.
And just last Saturday this blog wondered about the almost $80 trillion dollar derivative monster that JP Morgan was sitting on.
JP Morgan's massive short position in Silver is tied to a substantial number of derivatives which are triggered if the price of Silver remains above $36 per ounce for more than 60 consecutive trading days.
Is it a coincidence that the last time this deadline loomed (in early May, 2011) we saw a giant Silver smackdown?
Back then five margin hikes on traders in 8 days forced massive liquidation by investors trading on credit.
It triggered a sell-off that cascaded the paper price of Silver down to the mid $32.00 level, thus defusing the looming derivative time bomb.
Fast forward to September 2011.
After the May smackdown, Silver rebounded into the low $40 range despite massive shorting by JP Morgan.  On September 14th we outlined for you how the September CFTC Bank Participation report indicated that the four large US banks (primarily JP Morgan) had increased their silver shorts by 809 contracts in August from 23,775 to 24,584.
This was an increase of 4.05 Million ounces to the manipulative short position in silver in a single month. More importantly the total naked short position is up to 24,584 contracts.

It meant that JP Morgan has rebuilt their massive silver short position almost entirely back to the 25,412 contract position held prior to the giant short squeeze of August 2010.
This was all done in a frantic effort to beat Silver down below $36. But despite this massive manipulative downward pressure on the spot paper price of Silver, JP Morgan was facing another showdown with the Silver derivative time bomb.
Worldwide demand for Silver and Gold during this latest phase of the Sovereign debt crisis failed to dampen demand. Rather than drive drive investors away from the metal after the May smackdown because it is too volatile, buyers continued to accumulate Silver and the spot price was nearing another 60 consecutive trading days above the crucial $36 mark.
Derivative contracts on Gold were also nearing their tipping point.
When the Federal Reserve held their rare 2 day FOMC meeting last week, expectations were rampant that QE 3 would be announced in addition to measures like 'Operation Twist'.
When the Fed failed to impliment QE 3, the market tanked.
Was it a deliberate move?

Is a temporary minor market collapse a much lesser evil than allowing the top bank on the derivative list (JP Morgan) to implode from derivative exposure?
Not announcing QE 3 triggered a collapse in stock prices which had been pricing in the QE 3 announcement.  This forced liquidation.
And when we say 'liquidation', we mean wide-spread liquidation. Massive liquidation across asset classes such as currencies, bonds, commodities and stocks. All moved swiftly and sharply in a direction that screamed - Seek safety! Raise cash! Get liquid.

It's hard to imagine the Fed was ignorant of the impact not moving forward with QE3 would have.
Then, on Friday while stocks and the dollar all paused from the frantic selling, Gold and Silver were hammered. And the selling looked to be more calculated than incidental as it has been throughout the week.
There is little doubt that some of this is the association with usual gaming of the COMEX option expiration next week, and the potential delivery situation on that exchange with their unusually thin supplies and concentrated short positions held by a few of the banks.
But the trading volume in Gold on Friday was monstrous...in the neighbourhood of 340,000 contracts net.
In Silver net volume was an out-of-this world 114,000 contracts. This volume represented more than 100% of silver's total open interest. Just think about that for a second.
Then came the CME announcing a margin increase of 21% for Gold and 16% for Silver.
Warren Buffet famously called derivatives "financial weapons of mass destruction."
We were reaching a point where those derivaties could have wiped out JP Morgan and the other big four banks.
Desperate times called for desperate measures.  And it was desperate measures that were enacted this week to bring commodities down.
I would suggest to you that the stock market collapse this past week was but collateral damage in a far more significant battle.
==================

Please read disclaimer at bottom of blog.
Posted by Whisperer at 5:42 PM