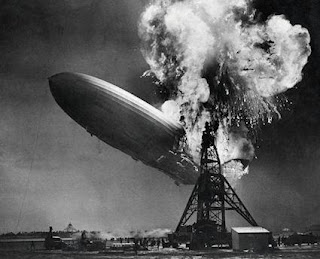 Great opinion piece in the Coquitlam Now newspaper on page 9 by Gord Goble today titled A Real Estate Implosion is on the Horizon: ‘Behind the propaganda and the mania is but a single house. A house of cards. And it’s teetering':

Is there a housing bubble in the lower mainland? Housing zeppelin is more like it. Bubbles, after all, are soft and cute and harmless. Zeppelins, conversely, hurtle into the ground, spewing flaming wreckage in all directions. And that’s precisely what we’re about to witness in the GVRD.

Consider the factors that have pushed our prices so absurdly high that the average family now spends 70% of pretax income to buy and own a home. Consider that we’ve already rocketed past the danger zone of most cities in the disastrous American run-up. Consider all that’s conspired to morph our region into the top two overpriced real estate markets in the world.

It starts at the top, with the federal government and the Bank of Canada. Despite doling out repeated warnings over our addiction to credit and our per capita debt, which now stands at a deeply troubling $1.50-plus per $1.00 of disposable income, those in charge have continued to facilitate easy mortgage borrowing and a credit culture. Why? For one, housing-related industries account for a quarter of our GDP. We’d look far less impressive globally were we not buying and selling obscenely expensive homes to one another.

And it filters down from there. The media, supported so heavily by real estate industry advertising (“This segment brought to you by Re/Max”), plays up self-serving industry propaganda and consistently portrays deceptive PR stunts as “news,” while blissfully ignoring realities such as plummeting sales and mushrooming inventory in former hot spots such as Richmond and Vancouver West, and an already tanking market in key neighbouring zones such as the Okanagan and the eastern Fraser Valley.

Our banks and lenders, meanwhile, squash accusations of subprime lending (loaning to high-risk borrowers – the same practice that helped crush millions of American families) while actively participating in it. Land developers literally work overtime to catch the end of the mania and the correspondingly sky-high valuations. Realtors pump the “Buy now or be priced out forever” mantra and work to falsely convince us offshore Chinese are grabbing everything in sight. Ultimately, locals are inundated from all sides with stories of unicorns and pots of gold and wrongly believe the pyramid scheme of the past decade will somehow, illogically, continue forever.

But, like The Matrix, not all is as it seems.

When the smoke clears, when developers have glutted the entire region with product (they’re almost there – just look around your neighbourhood), when realtors – mere salespeople – are no longer rock stars and pseudo-financial advisors, when the CMHC stops backing every high-risk borrower that comes calling (the corporation, run by a board with blatant ties to the real estate industry, will soon sport a much shorter leash), when newly introduced mortgage restrictions have sliced and diced the number of potential buyers, when interest rates have jumped from their emergency lows, when local TV producers stop airing dubious realtor PR stunts (helicopters purportedly loaded with offshore realtors, trumped-up condo lineups, marketers posing as investors) as hard news, when the market is flooded with the homes of bailing baby-boomers seeking to fund their retirements, when the imaginary tidal wave of incoming Chinese is revealed as the mere speculative ripple it has been, when fatigued owners realize killer home payments devastate every other aspect of their family’s lives, and most importantly, when the mania dies (manias always die) and when real estate ownership is no longer the Holy Grail, there will be nothing left but you and decades of onerous payments on a crashing asset.

You will wonder what could have possessed you to overpay by fifty or a hundred percent for a creaking “old timer” in a lousy neighbourhood or a “new” slapped-up-in-a-month-by-handymen townhouse in a future ghetto, and you will curse the day you saw the pretty ad that compelled you to do so. Your realtor will not be there to console you, your lender will not hand you free money to extricate yourself. Worse still, there will be no respite to those who, for reasons beyond their control, need to sell. They will do so at a grievous loss.

So…what do you do? If you bought near the peak (roughly mid-2011), and particularly if you’re feeling the strain already, contemplate selling – before the downward spiral picks up steam. If you’ve so far resisted the siren song, continue to resist. Instead, rent.

Renting gets a bad name in a transitory environment where even pizza delivery guys contemplate $300,000 condos, but remember: Renters are immune to exploding zeppelins. Renters are free to invest the money they saved by not buying. Renters do not surrender thousands per annum on property taxes, repairs, renovations, city utility bills, and burdensome monthly maintenance fees. And renters can move without enduring the cost and hardship of selling. Your realtor will tell you “Renting is throwing your money away.” You can tell him he’s a liar.

Buying and owning a principal residence can be a smart move. But not here, not now. Not when mania is at the helm, not while deception remains healthy, and not when the long slide they don’t tell you about has already begun. Many will lose. Heavily. Don’t be a loser.


Meanwhile, we often talk about how our hamlet here on the wet coast is influenced by outside money, particularly HAM (Hot Asian Money).
There is no doubt that the downturn in the Asian markets is having an impact here.

This blog often ponders at what point world wide conditions will trigger HAM to sell their assets here to cover margin calls elsewhere. Obviously this requires global macro conditions such as external real estate markets, stock markets, foreign government policy, etc. to play a large factor int those decisions.
With that in mind, let's cast our eyes to a website called Global Property Guide which has some interesting data on the world wide housing market.
They are reporting that in fiscal quarter 1 of 2012, the global house price downturn has been accelerating as evident from their latest house price indices survey.  Here is what they have to say...

House prices fell in 24 countries, of the 36 countries for which quarterly house price statistics are available, and rose in only 12 countries (click on image to enlarge):

During the latest quarter the downturn appears to have accelerated, with house price falls in 26 countries, and house price gains in only 10.
In nominal terms only 16 countries experienced house price falls during the year, while 20 countries recorded house price rises. But the Global Property Guide's statistical presentation uses price changes after inflation, giving a more realistic picture than the more upbeat nominal figures usually preferred by real estate agents.
Faster-paced deterioration in European housing markets
Ireland's price-declines have been, over the duration of the crisis, catastrophic. It is disheartening to see more agony, yet the picture really is alarming. House prices fell 18.95% year-on-year, contrasting with a decline of 'only' 13.12% during the same period last year. Furthermore, house prices were down 5.19% during the latest quarter. Tough credit conditions, an oversupply of housing, and weak domestic demand have weighed down the Irish residential property market (click on image to enlarge):

There was also an alarming increase in momentum of house-price declines in Athens, Greece (-11.68%); in Warsaw, Poland (-10.94%); in Portugal (-10.45%); in Spain (-9%); in the Netherlands (-6.05%); and in the Slovak Republic (-5.89%). All saw bigger house-price declines this year than the previous year.
Several countries whose housing markets were last year either in recovery or only just in downturn, saw a significant deterioration in their position, with house price falls during the year to end Q1 2012 in Finland (-2.05%), in Turkey (-2.32%), Sweden (-5.34%) and Riga, Latvia (-5.83%).
In other European countries, any positive changes in the momentum of the housing markets were so feeble, that they hardly signal a recovery. These countries include Kiev, Ukraine (-2.51%), Croatia (-2.45%), United Kingdom (-3.14%), Lithuania (-3.87%) and Bulgaria (-6.21%).
Some strong European markets do relieve the gloom. In Estonia house prices surged by 9.13% year-on-year, and in Austria house prices rose by 8.24% year-on-year. In fact the upsurge in these two countries' housing markets was so strong as to propel them into third and fourth place in the worldwide league table.
Other strong housing markets over the past twelve months include Switzerland (+5.49%), Norway (+5.43%), Russia (+3.86%) and Iceland (+2.25%). The 'gainers' seem to be countries whose housing markets either never experienced the recent downturn (Austria, Switzerland, Norway), or are recovering (Estonia, Russia, Iceland).
House prices in India (Delhi) and Brazil (Sao Paulo) surged further, but momentum down during the quarter
Over the year to Q1 2012, Delhi house prices skyrocketed by 24.41%, though during the last quarter, they fell 0.07%. Some other Indian cities like Chennai and Kolkata saw house price falls year-on-year, according to NHB Residex.
In Sao Paulo, house prices climbed by 18.70% in the year to Q1 2012, but the latest quarter saw a price-decline of 2.57%.
Most Asian housing markets slowing
In the Philippines (Makati Central Business District), prime condominium prices rose by 7.34% during the year. But the figures possibly exaggerate the upsurge, because they are for Makati, the heart of the Philippines' business process outsourcing boom. In South Korea house prices were up 2.67% from a year earlier.
Housing markets in the rest of Asia cooled over the year to Q1 2012, due to government measures implemented last year. House prices in Hong Kong were up a mere 0.19% on the year, after a rise of 19.80% the previous year. There were house price falls in Indonesia (-0.13%), Singapore (-1.36%), Tokyo, Japan (-2.64%) and Shanghai, China (-3.68%).
US housing market making progress
US house prices rose modestly to 0.48% year-on-year, with a quarterly rise of 0.55%, according to the Federal Housing Finance Agency's (FHFA) seasonally adjusted purchase-only house price index. In inflation-adjusted terms, US house prices were still down 2.27% from a year earlier. But this is a significant improvement from last year's 7.44% decline in house prices.
Increased affordability and a somewhat smaller inventory of homes for sale are positively impacting house prices, says FHFA Principal Economist Andrew Leventis.
Israeli house prices weakening
House prices in Israel were down 4.94% year-on-year to Q1 2012. Prices were hit by worldwide uncertainty, plus measures taken by the Israeli government and the Bank of Israel. The fall comes amid popular protests since last summer over high prices, which have not yet waned.
New Zealand firm, but Australia under pressure
House prices in New Zealand climbed by 0.82% over the year to Q1 2012, after falling 4.79% the previous year. Sales activity has been strong for the last few months, with volumes at the highest levels since 2007.
Australian house prices fell for the fifth straight quarter to -6.04% from a year earlier, the longest downturn for a decade. The central bank has maintained the highest borrowing costs among major developed nations.

Please read disclaimer at bottom of blog.
Posted by Whisperer at 10:17 AM