Burying our heads in the sand... (merp!) 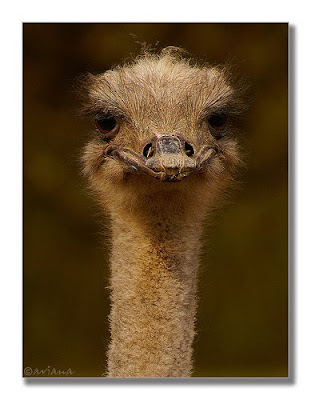 I have some comments to make about Amoss and the Bank of Montreal, but I am going to sit on if for a bit.

It's easy to write Amoss off but as we saw yesterday, with the update I added from the Financial Post, many analysts still have problems with BMO. And where there is smoke, there just might be some fire.

In the meantime, let's turn our attention back to Real Estate in Vancouver.

Could the market really recover this quickly from the traumatic trifecta of a record real estate bubble, leviathan levels of debt, and a global credit collapse?

We don’t see it as remotely possible, but yet... there for everyone to see... are countless happy headlines and breathless exhortations that the worst is behind us.

July has been a record breaking month for sales. Here is a chart of the Teranet Historic Index Values for Vancouver and we are on an uptick again. And this is before the July stats have been factored in. 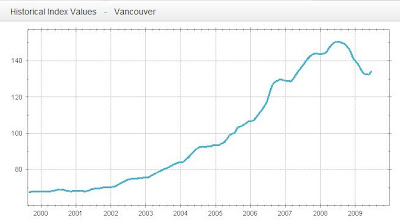 And the frenzy is having it's effect.

A work colleague has, just this week, committed to a home purchase in Surrey. With a mortgage at over a half million dollars, it is a significant move.

When asked if he could make things work if interest rates bump up to 6 or 8%, the responsive is chilling. "Sometimes you just have to take a risk."

Another work colleague has constructed a dream home costing in excess of $1 million, is plunging headlong into a new business that will require another 1/3 of a million and halting concedes it's all highly leveraged.

When asked about it, he tells me that "you can't always just sit back".

Meanwhile acquaintances in the neighbourhood are struggling with only one income as the husband languishes unemployed since January (construction industry). They sought relief in March by tapping out the equity in their family home. Having exhausted that funding, they have just drawn on the remaining equity in a second home they own as an investment property. Who says use of the Home ATM is dead?

Have the lessons of the last year been completely lost on these people?

We are nearing the day of reckoning here on the wet coast and the signs are everywhere.

The BC goverment, who have been in denial about the severity and state of the world economy, are being forced to pull their heads out of the clouds. Back in May people predicted the government would be in serious financial trouble. The provincial goverment steadfastly denied there was a problem looming.

The B.C. Liberals warn of impending cuts to government grants, possible layoffs and public-sector wage freezes. The cash-strapped politicians shriek that "the fiscal cupboard is bare and hangs on a wall of deficit spending." The Finance Minister declares that the "downturn is far beyond what we previously had anticipated."

In the United States, the White House warned this week that the economy is in worse shape than expected. Strategist's advise that we shouldn't count on consumers to fuel any economic rebound.

And the US national debt, the sale of whose treasuries controls the setting of mortgage interest rates, will nearly double over the next 10 years - virtually guaranteeing a dramatic increase in interest rates as the US struggles to fund that debt.

Coming back to Vancouver, we seem oblivious to it all.

We are clearly the most bubbly city in North America right now and Vancouverites seem to be in a total state of delusion as they dive headlong into mountains of debt anchored by real estate.

All it will take is a catalyst to trigger catastrophe.

Maybe that's why the Bank of Montreal rumours we covered in detail set off such an avalanche of hits to this site (over 15,000 in 24 hours).

Maybe, just maybe, EVERYONE doesn't have their heads in the sand.

Please read disclaimer at bottom of blog.
Posted by Whisperer at 12:03 AM