29.99 Reasons to Get out of Credit Card Debt Now 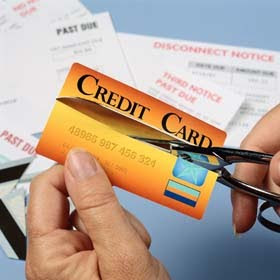 Back in March 2009, the Certified General Accountants Association of Canada (CGA-Canada) released a consumer survey on the topic of household debt and consumption in Canada.

It's results were frightening and the numbers have only grown since then.

The country’s accountants warned that families owed $1.3 trillion, most of which was personal debt on credit cards and LOCs.

The three main indicators of household indebtedness (debt-to-income, debt-to-assets and debt-to-net worth ratios) deteriorated significantly in the past two years and particularly during 2008 (the study was conducted at the end of 2008).

The main cause of increasing debt for the majority of households was day-to-day living expenses with lines of credit and credit cards accounting for the largest proportion of consumer debt.

85% of indebted Canadians have outstanding debt on a credit card and one in ten families could not pay a $500 bill.

Scarily 79% of indebted Canadians were still confident that they could either manage their debt well or take on more debt load.

That was at the end of 2008. And with the appearance of an immaculate recovery in our real estate values, families in the home and native land have done just that - taken on more debt load throughout 2009.

It seems as if nothing was learned by anyone from the economic earthquake of Autumn 2008.

With that in mind, will anyone take heed of the warning flashing across the United States this month?

Before the recession began a little over a year ago, credit card companies were offering some of the most attractive rates and balance transfers ever seen. Many people were using credit cards to not just supplement their lifestyles, but many also began using these offers as a means of financing their daily expenses.

It made sense to transfer an 9% line of credit to a 3.99% fixed rate with a credit card company... that's quite a savings.

Borrower beware: those rates can change in a heartbeat.

We've already seen it in Canada. TD suddenly raised it's line of credit rates earlier this year. But that pales in comparison to what is happening with credit cards in the US.

As we speak, US banks (that were bailed out with billions in federal loans) are now rapidly changing the rates and terms of their previous agreements and driving more and more people and small businesses into financial crisis and bankruptcy.

The increases are coming in advance of new credit card industry regulations which are to take effect in February of 2010.

Without cause or conscience as to the potential consequences they are creating for their customers, interest rates are being jacked up dramatically. Since the beginning of the year, almost 60 changes have been made by nine different credit card issuers, many of which are APR increases.

In the last two weeks, Bank of America added an annual fee to some cards and Citibank has raised the APR to 29.99% for many cardholders as well as cancelled the accounts of customers holding some of their co-branded cards.

That's right, customers who were paying faithfully and honoring their agreements have simply had their credit cards cancelled.

Citibank customers received a letter in the mail stating that their current 9.24% APR would be increased to 29.99% in order to "provide customers with access to credit." Here is an excerpt from the letter which you can view here.

US blogs are littered with disheartening stories of consumers who have had fixed rates changed to variable rates, interest rates doubled (or tripled) and minimum monthly payments increased by 200%. Many of these people were pushed to the brink of bankruptcy, others are simply being fleeced.

And because of the cardholder agreements, you don't have to have been late, gone over limit, or done anything for that matter for a bank or credit card company to raise your rates, decrease your line of even increase your required minimum payment to twice it's previous amount.

Or worse, they can simply turn your debt into a demand loan and cancel your card.

But what about that new US credit card legislation coming in February 2010? Won't it prevent banks from arbitrarily raising interest rates into the stratosphere as Citibank has just done?

Not really. The new legislation will only prevent a dramatic hike on your current card. It will not prevent credit card companies from offering you significantly higher interest rates when your credit card expires or when you go online to apply for a new one.

This is a big loophole. And you can bet your buns no card will have an expiration date more than 12 months from the day it is issued.

If you check your credit card, the expiration date will likely fall within the next year or two. When that date arrives, your credit card company has every right to offer you the same 29.99% deal that Citibank offered its US customers, forcing you to either close your account or accept an extortionate interest rate.

Given everything that has happened to credit card users this year, this type of tactic may become common very soon.

Please read disclaimer at bottom of blog.
Posted by Whisperer at 12:59 AM