Hedge-Fund Bets On Hyperinflation... and has inflation 'officially' started? 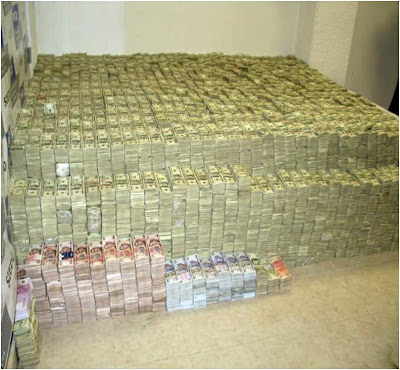 HA is most famous for betting against subprime mortgages in 2007. When the US housing bubble popped, they made billions of dollars with their hedge. As a result, HA's economic views now received a heightened level of attention.

And the blogosphere is a tither about their latest, controversial letter to clients predicting that the U.S. may experience hyper-inflation.

Now the fact that many people think that inflation will follow the massive fiscal and monetary government stimulus that has been injected to fight the the recession and financial crisis is nothing new.

We've posted about it quite a bit.

But hyper-inflation?... that is the extreme.

Hyper-inflation would mean inflation in the ballpark of 30% per year -- at least. Generally hyper-inflation is measured by the month or day, not year, because the numbers are so high.

What has caught everyone's attention with HA's latest advice is their reference to a study by Peter Bernholz.

There have been twenty eight episodes of hyper-inflation of national economies in the twentieth century with 20 occurring after 1980. In his most recent book, Monetary regimes and Inflation; History, Economic, & Political Relationships, Bernholz analyzes the 12 largest episodes of hyper-inflation - all of which were caused by financing huge public budget deficits through money creation.

The study notes that according to the current Office of Management and Budget projections… the U.S. will run deficits equal to 43.3% and 39.9% of expenditures in 2009 and 2010, respectively. In other words roughly 40% of what the US government is spending has to be borrowed.

It prompts HA to ask it's clients, "has the U.S. reached the critical tipping point?"

The hedge fund's letter is attracting significant interest for several reasons. First of all because it's a hyper-inflation argument that doesn't seem wacky - it's rooted in historical observation.

Secondly it has nothing to do with the massive monetary stimulus by the Federal Reserve, which could cause additional inflationary pressures. So even if you believe that the Fed can control their side of the equation, the government spending might still cause inflation to get out of hand.

Skeptics counter that the U.S. has a more robust, developed and sophisticated economy than most places where hyper-inflation has occurred. They say that fiscal and monetary policy would be seriously altered to avoid incredible levels of inflation if the U.S. found itself facing such a predicament.

None-the-less, successfully keeping inflation as low as it has been in recent years seems highly unlikely with each passing day. And whether you buy into the fund's logic or not, its letter is an interesting one. It also provides analysis on China and Japan.

If you have some time to kill and interest, you might want to give it a read.

On another inflation note, the Reserve Bank of Australia became the first G-20 nation to raise interest rates yesterday. The RBA bumped interest rates up 25 basis points to 3.25%, a move observers were convinced wouldn’t come until at least November. Thus, Australia is implicitly declaring the end of its economic downturn.

The move is raising alarm bells because the first hike is seen as opening a Pandora's box of interest rate hikes around the world.

Chuck Butler of EverBank says that, “if the RBA went this soon, then we can expect Norway's Norges Bank to push its rate hike earlier on the calendar, maybe even later this month! And it won't be the only one! Look for New Zealand to hike rates this year, and who knows what other country will follow after that.”

And you will recall that Bank of Canada governor Mark Carney tempered his promise to keep our nation's rate at 0.25% only if inflationary pressures didn't start to emerge.

Well... they are now officially emerging.


Please read disclaimer at bottom of blog.
Posted by Whisperer at 12:25 AM