So what, exactly, happened yesterday in the stock market? 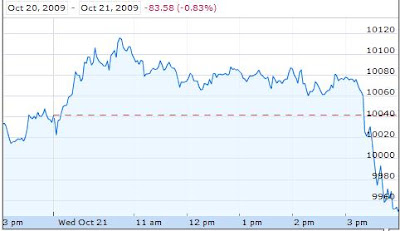 Why did the stock market drop so dramatically in the last hour of trading yesterday? Here's the story from Bloomberg:

First off you have to appreciate that Richard Bove is a screaming bull when it comes to the major banks in the United States.

More importantly, he's highly respected. Tim Smalls, head of U.S. trading at Execution LLC in Greenwich, Connecticut had this to say about Bove, "he has a very good following and very long track record of consistency.”

But that's not the best of it. Bove - cheerleader of major bank stock and shill for the likes of Fargo - was on CNBC yesterday morning raving about Wells Fargo.

Then he saw Fargo's numbers.

Faithful readers will recall we thoroughly eviscerated Wells Fargo back in April when the Bank stunned the world by proclaiming it had just finished its most profitable quarter ever. To say we were incredulous is an understatement

And when Bove saw Fargo's most recent report, he (finally) came to a similar conclusion and dramatically switched his assessment of Fargo from "buy" to “sell”; a stunning turnaround from someone who had just that morning been singing the bank's praises.

What they mean when they say "assets no longer collecting interest", they mean foreclosed homes that no one is paying back anymore. They're UP 28%! And Fargo is has INCREASED the reserve for future losses to $24.5 billion. That represents a potential of almost $50 Billion in loan losses (the size of Canada's record breaking deficit).

The fact of the matter is that the US banking system remains basically insolvent as unemployment soars and the economy worsens. People are walking away from their homes in the United States in record numbers as home prices continue to nosedive.

And what the Wells Fargo numbers tells us is that the loan losses that the major US banks have been hit with are STAGGERING and the problem continues to worsen.

Meanwhile many banks continue to play a sleight-of-hand game by creating a shadow inventory of unreported foreclosed homes. These are homes that are sitting empty because their mortgage holders have walked away but the banks haven't 'officially' foreclosed on them.

They do this in a vain attempt to stem the glut of product hitting the housing market and driving down prices.

These shadow inventories are still incredibly high and hide the full extent of the housing collapse in the United States.

Fargo has only admitted to $23 billion of bad loans. What does that number look like when you include Wells' shadow inventories? We're willing to bet Fargo's reserve of an additional $24.5 billion doesn't even begin to cover it.

The banks recent record profits are a sham because (as pointed out in April) the government has allowed them to use manipulative regulation and accounting standards to play a shell game that allows them to defer taking the losses from the housing bust (mark to market, among others).

And as you may recall, the burst in the stock market after quantative easing was announced was propelled by Wells Fargo and their announcement of 'record profits'.

Back in April we said, "the more information that comes out, the more disconcerting the stability of the bank appears. Watch for Fargo stock to drop like a rock when complete financial statements come out. And with it could go investor confidence in the latest market rally."

That reckoning may not fully play itself out yet... but one thing is now very clear; it's coming.

Please read disclaimer at bottom of blog.
Posted by Whisperer at 11:57 PM