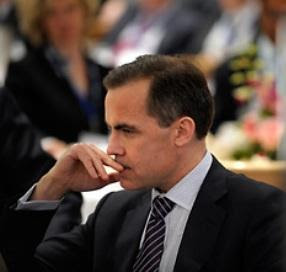 Yesterday in Montreal, Bank of Canada Governor Mark Carney said that "we are awash in moral hazard. If left unchecked, this will distort private behavior and inflate public costs."

Oh really? And who put it there?

Moral hazard is an old bit of insurance jargon that describes how people misbehave when they think they are covered against risk.

For example, in Canada we have deposit insurance on the first $100,000 of our deposits. Because that money is guaranteed, what do we care if the bank should fail?

To hear Carney say that we are ‘awash in moral hazard’ is almost comical, considering he is responsible for a large part of it in the Canadian Real Estate market.

The Bank of Canada opened the moral hazard floodgates last year when they cut interest rates to zero and purposefully dumped cheap money into real estate. CHMC has a new report showing 57% of all real estate purchases this year come from first-time buyers (double the number from a year ago) and all of those first time buyers are putting down the minimum 5% - meaning they are all utilizing CMHC’s bank-saving insurance.

And because CMHC - a federal government agency - backs all these high-risk mortgages with taxpayer dollars, all the risk for making these loans is removed from the banks. It enables Banks to lend to people who don't have money and little prospect of paying their loans off. It enables Banks to give these high risk borrowers the lowest mortgages rates available despite the fact they have the highest default risk.

Why... because no risk accrues to the Banks because of the CMHC insurance. If you're looking for classic 'moral hazard' - there it is!

In case you don’t recognize what we have here – these are ’subprime’ borrowers and Carney's temporary, ultra-low interest rates are equivalent to US-style 'teaser' rates.

As we noted last week, Banks have been, "scrambling to get enough product to put into the federal government's Insured Mortgage Purchase Program over the months, and that may have translated into excessively generous financing terms."

That’s the PC way of saying Banks have bent over backwards to approve people for loans who shouldn't have been approved so that those mortgages could be sold off and securitized. All of which, by the way, is EXACTLY what was happening in the United States before their real estate collapse.

Having created the hazard, via cheap money and loose policy, Mr. Carney is now trying to rein it in.

Last week he warned that he expected "prudence" from mortgage lenders and from average Canadians who spent the entire year rushing to capitalize on record low mortgage rates by buying new homes.

"We remind people that borrowing is for the period you are going to borrow, not just for the moment you take out the loan... It's not my job to give investment advice to Canadians. But on the general point anybody, anytime they borrow for a longer period of time, wants to [ask themselves], 'can I sustain that borrowing over the course of that time? What happens when interest rates ultimately normalize?'”

That's Carney's way of saying that bankers and home buyers will be to blame if the bubble created by cheap money were to burst.

Watch this to be only the start of Mark Carney’s artful dodger routine as sets out to escape his own responsibility for the coming financial and real estate meltdown.

As Carney has said, higher interest rates are coming and he can see what lies ahead.

Please read disclaimer at bottom of blog.
Posted by Whisperer at 12:53 AM