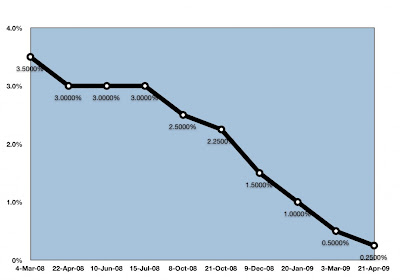 A few weeks ago we told you about a colleague who recently bought into the Lower Mainland real estate market. His story is not unlike many recent buyers who have taken advantage of today's 'affordability'.

The monthly payment, including property taxes... just over $2,900 per month.

The house has two suites and the only way it can work for him is if he rents those suites out.

On Friday, the Bank of Montreal raised the 'affordability' stakes even higher when it launched a promotional push for its five-year closed variable mortgage at 2.25%, which it calls the “lowest rate in more than 30 years.”

Call it the crack cocaine fueling the mortgage market addiction.

Are home buyers being blinded by all of this?

As you can see by the chart above, rates have been slashed to dirt in a desperate attempt to resuscitate the real estate market.

This week the Governor of the Bank of Canada warned Canadians that rates will be going back up.

So let's set aside inflation concerns for a moment.

Let's set aside fears that we will see a return to the historic norms of 8.25% or a return to the late 1970's era of double digit interest rates approaching 15% and higher.

What happens when rates simply go back to what they were in March of 2008?

Is a minimum $1,000 a month jump in payments still 'affordable'?

We hope so because denying a return to the rates we had in place only 18 months ago is pure folly.

And that is only the beginning of what is to come.

Please read disclaimer at bottom of blog.
Posted by Whisperer at 3:00 AM