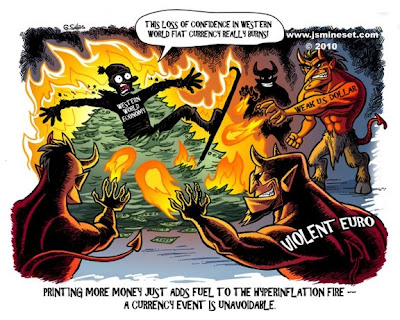 The big news today is a massive bailout of the banks of Europe by the US Federal Reserve and the world's reserve currency.

Faithful readers know that we are fond of saying the financial debt crisis of 2008 is very much alive and it is clear for everyone to see that it had only been treated with a paper band-aid known as Quantitative Easing 1 and QE2.
Those economic green shoots touted in 2009? Nothing more than weeds.
The breadth and depth of the financial earthquake the world suffered in 2008 was so great that the repercussion's are only just beginning to be understood.  And the recession it triggered has not ended... it has only just begun.
One of the news stories that flowed well under the mainstream media radar screen back in July was the results of an audit of the US Federal Reserve.
The first ever Government Accountability Office (GAO) audit of the US Federal Reserve Bank in the Fed's 100 year history indicate that the bank dished out $16 trillion in emergency aid to U.S. and foreign banks, corporations and governments in what the Fed calls all-inclusive loans during the financial crisis.
$16 Trillion!
In all the Fed disclosed more than 21,000 transactions which it utilized after Lehman failed to push as much liquidity into the worldwide financial system as possible to stabilize things.

The debt escalating debt contagion stories coming out of Europe the past two weeks have been breath-taking.

It has forced the US Federal Reserve to step in again and bail out Europe's banks with unlimited access to US Dollars.

Here is the European Central Bank announcement:
As noted over on The Fundamental View, the global printing presses are now running full tilt in the most historic liquidity event ever.
In essence the Governing Council of the European Central Bank (ECB) has decided, in what is being deemed as a coordinated effort with the US Federal Reserve, the Bank of England, the Bank of Japan and the Swiss National Bank to conduct three US dollar liquidity-providing operations.
Short term this saves the Euro from the collapse it was facing just last week.

But as this story on Yahoo headlines "Dollar access no long-term fix for Europe's crisis but could buy time for banks"
Officially this confirms the view that the banks around the world are pretty much insolvent given their exposure to the mounds of toxic sovereign debt.
Basically governments and banks are broke because they lent money out to other banks and governments.
The ECB said it would hold three separate operations between October and December to help see banks through the year-end period. Basically the Americans, the British and the citizens of any non-Euro nation in the West are now watching their central bank printing dollars at the expense of their children's’ future’s so that it can bail out banks from other parts of the world.
This is what we get in a world of global economic collaboration when every bank is somehow tied to each other through invisible lifelines. Point being, if one major institution goes down, others will fall like dominoes given that they have all lent money to one another via exotic instruments in order to keep the global banking ponzi scheme alive.
The bottom line is that the US Federal Reserve - as it did in 2008 with $16 Trillion, just backstopped a massive loan to European banks to keep them solvent.
As the Fundamental View asks, "How closely tied are American financial institutions to the European banks needing the bailout for the Fed to take such measures overseas?"
The world's problems are literally being papered over. But the reality is that the situation is much graver than most people realize.
And what just occurred was a very short term, temporary solution.
The breadth and depth of the financial earthquake the world suffered in 2008 is only just beginning to be understood.

Please read disclaimer at bottom of blog.
Posted by Whisperer at 2:29 PM